Review: "REIGN OF THE SUPERMEN" Does Not Reign 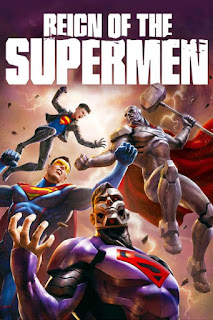 Reign of the Supermen opens six months following the death of Superman at the hands of Doomsday (as seen in The Death of Superman), and the rising crime rate in Metropolis has spread beyond the city.  Meanwhile, four new super-powered beings have emerged to take Superman's place.  Still grieving the loss of Superman and, by extension, his alter-ego, Clark Kent (Jerry O'Connell), reporter Lois Lane (Rebecca Romijn) of The Daily Planet has been investigating the new Supermen by gathering whatever information she can from different sources.

One Superman is a gold-visor wearing, energy blast-shooting vigilante called “The Eradicator.”  Another is “Steel,” the armored hero who is the identity of a young scientist, John Henry Irons (Cress Williams).  The third is a teen clone of Superman created by a scientist working for Lex Luthor (Rainn Wilson), and the public starts calling him “Superboy” (Cameron Monaghan).  The fourth, who seems the most like Superman, is part-man and part machine and is called “Cyborg Superman.”

The four “Supermen” are controversial and mysterious, and one of them is conspiring with Darkseid (Tony Todd) in the lord of Apokolips' plan to invade Earth.  Meanwhile, the Justice League:  Wonder Woman (Rosario Dawson), Batman (Jason O'Mara), Aquaman (Matt Lanter), Cyborg (Shemar Moore), Flash (Christopher Gorham), Green Lantern (Nathan Fillion), Hawkman, and Martian Manhunter (Nyambi Nyambi) have been sidelined.  Now, Lois and the three truly heroic Supermen must uncover the mystery of what actually happened to the real Superman if they are going to stop a plot to take over the world.

Some of the central conceits of superhero comic books and their media adaptations are that the superheroes will almost always win; the bad guys will lose; a superhero's death will ultimately not benefit the super-villain; and the villains will plot even in defeat, while the superheroes remain vigilante.  If you are never bored by this, you will generally always like or love superhero fiction.

In the case of Reign of the Supermen, the conceits are alive and well.  While the idea of Superman dying always causes the fanboy in me some internal discomfort, I found myself mostly bored by Reign of the Supermen.  I couldn't wait for this movie to end, but I wanted to finish it in order to write this review.  I did like the four “Supermen” and the drama in the film built around them.  Everything else only mildly interested me.

Posted by Leroy Douresseaux at 3:32 AM