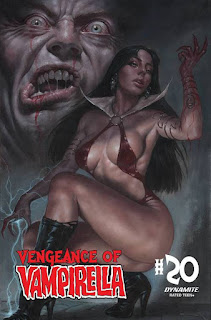 One of Dynamite's Vampirella comic book series is Vengeance of Vampirella, which was also the title of a Harris Comics series.  Vengeance of Vampirella Volume 2 is (currently) written by Thomas Sniegoski; drawn by Michael Sta. Maria; colored by Omi Remalante, Jr.; and lettered by Troy Peteri.  The series focuses on a reborn Vampirella who fights the forces of chaos to save humanity.

Vengeance of Vampirella Volume 2 #20 opens on the day after the fall of Mistress Nyx.  The war between Order and Chaos has come to an end, and as the dust settles, humanity begins the process of rising from the ashes.  However, what is to become of “The Infernal,” the dark forces that Nyx led?  Without her, they are leaderless and could continue to cause problems.

Meanwhile, what of Vampirella, the woman born of darkness to serve the light, who killed Nyx?  Vampirella was also forced to kill Adam, her lover who sided with Nyx.  What has this done to her?  Will Vampirella regain her lost humanity or will she fall to darkness?

THE LOWDOWN:  Dynamite Entertainment's marketing department recently began providing me with PDF review copies of some of their titles.  One of them is Vengeance of Vampirella Volume 2 #20.  It not only the first issue of this series that I have read, but it is also the first Vampirella comic book that I have ever read.

Strangely, I find myself drawn to this comic book and to its star character.  In theory, Thomas Sniegoski's script for this issue could seem like story decompression and padding for a trade paperback.  However, he makes the struggles within and without Vampirella seem engaging and important.

The art and storytelling by Michael Sta. Maria both recalls classic Warren Publishing Vampirella and captures the intensity of her struggle with the power of the forces arrayed against her.  Omi Remalante, Jr. impressionistic colors strike the right tone, and letterer Troy Peteri brings sanity to the wildness of the graphics by keeping things in order.

Having finally tasted a Vampirella comic book, I want more Vengeance of Vampirella Volume 2.  I won't call this a great comic book, but it certainly seems like something worth spending money on … if you like vampire comic books.