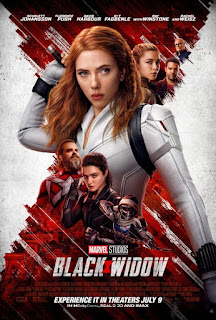 Black Widow is a 2021 3D superhero film directed by Cate Shortland and produced by Marvel Studios and Walt Disney Studios Motion Pictures.  It is the 24th film in the Marvel Cinematic Universe (MCU) series.  The film is based on the Marvel Comics character, Natalia Alianovna “Natasha” Romanova/Black Widow, that was created by Stan Lee, Don Rico, and artist Don Heck and first appeared in the comic book, Tales of Suspense #52 (cover dated: April 1964).  Black Widow the film finds the title character on the run and forced to confront the conspiracies and people of her past.

Black Widow is largely set between the events depicted in the films, Captain America: Civil War (2016) and Avengers: Infinity Wars (2018).  The film, however, opens in 1995.  Young Natasha Romanoff (Ever Anderson) lives a quiet life in suburban Ohio with her younger sister, Yelena Belova (Violet McGraw), and their parents.  But Natasha and Yelena are not siblings, and their surrogate mother, Melina Vostokoff (Rachel Weisz), is really a Russian scientist/spy, and their father, Alexei Shostkov (David Harbour), is a spy and also the costumed superhero, “Red Guardian,” Russia's super-soldier version of Captain America.  When this “family's” mission suddenly ends, Natasha and Yelena are returned to Russia and sent to the “Red Room” for further training.

Twenty-one years later, in the year 2016, Natasha Romanoff/Black Widow (Scarlett Johansson) is on fugitive, on the run from U.S. Secretary of State Thaddeus Ross (William Hurt).  Fate reunites her with an older Yelena Belova (Florence Pugh), who until recently was still a “Widow,” an assassin working for the Red Room.  Now, both women, traumatized by their pasts, set out to find and kill Dreykov (Ray Winstone), the head of the Red Room and the mastermind behind the “Widow” program.  To do so, however, they must mend the broken relationships of their pasts, and Natasha must face the reality that her actions could not only alert her pursuers to her whereabouts, but could also lead to her destruction.

I wondered how Marvel Studios could hope to deliver a superhero movie that would satisfy their audiences in the wake of Avengers: Endgame, which was a special effects extravaganza, which changed the Marvel Cinematic Universe (MCU), which was a record-setting box office hit, and which saw some beloved characters die, including the Black Widow.  Black Widow does offer big action sequences: a harrowing opening air plane escape, a battle royale in Budapest, a crazy prison escape, and that final showdown on a giant aerial base.  After waiting two years for a Marvel Studios film (because of the COVID-19 pandemic shutdown of movie theaters), the big action of Black Widow is big enough to sate my Marvel needs.

However, I must be honest, it is the action that really makes Black Widow for me.  The drama is good, and the interpersonal relationship conflict and drama are fitting for the story of a character like the Black Widow who past is so very dark and is filled with violence and pain.  The main cast of Black Widow:  Scarlett Johansson, Florence Pugh, David Harbour, Rachel Weisz gives excellent performances in this tale of betrayal and of secrets of lies.  In a way, these performances only serve to make the drama all the more dark, edgy, and, at times, depressing.  So, that is why I must be honest.  I respected the character drama of Black Widow, which director Cate Shortland delivers in gritty detail.  But while watching the film, I was always anxious for the arrival of the next big, special effects-driven action sequence, and man, Black Widow did not disappoint!

Black Widow has a great adversary in “The Taskmaster,” but the reveal of that villain's identity is a bit of a letdown.  Ray Winstone, an actor I like, was just okay as Dreykov, a promising bad guy the script makes into a shallow character.  Still, the action scenes – I'm crazy about them.  They are both the reason that I am giving Black Widow a high grade and the reason I will watch Black Widow many more times when it starts airing on cable television in a little less than two years from now.

Posted by Leroy Douresseaux at 7:15 PM