Review: "THE DEATH OF SUPERMAN" Saved by Superman vs. Doomsday 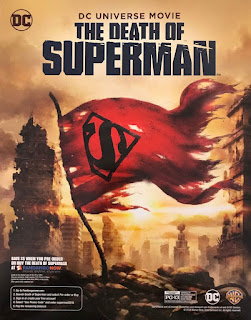 The Death of Superman is a 2018 straight-to-video animated superhero film from Warner Bros. Animation and directors Sam Lui and Jake Castorena.  It is the thirty-second film in the DC Universe Animated Original Movies series.  The movie takes its story from “Doomsday!” (also known as “The Death of Superman”), a story arc that ran in various DC Comics titles in late 1992.  In The Death of Superman movie, Superman battling a seemingly insurmountable foe.

The Death of Superman finds Superman (Jerry O'Connell) at the height of his popularity as a superhero in Metropolis and around the world.  However, Superman has some brewing domestic issues in his civilian life as Clark Kent (Jerry O'Connell).  Clark is dating Lois Lane (Rebecca Romijn), a fellow reporter at The Daily Planet.  Clark's parents, Ma and Pa Kent (Jennifer Hale and Paul Eiding), are visiting, and they will finally meet Lois, but that only forces Clark to face the fact that he has not told Lois that he is Superman.

Elsewhere, without warning, a meteor has crashed on Earth causing trouble above in Earth orbit and below in the ocean depths.  Emerging from the meteor is a gray-skinned, white-haired monster with incredible strength, stamina, and invulnerability.  Also, its skeleton protrudes through its skin in the form of multiple razor-sharp spurs.

The Death of Superman is not the first time that the “Doomsday”/“The Death of Superman” story line has been adapted into a direct-to-DVD animated film.  The first was 2007's Superman: Doomsday, which I did not care for all that much.  Concerning this newer film, I don't like the graphic design of the characters, who all appear to have anemic faces.  In fact, their heads are all face – odd, angular faces.  I find them a little jarring to look at, but the animation moves smoothly.

I thought the first half of 2018's The Death of Superman was dull, but the second half is a blast to watch.  Doomsday's fights with the other members of the Justice League are filled with bone-crushing blows and near-death intensity.  The Superman vs. Doomsday battle is so powerful that calling it “epic” does not completely describe the insane violence displayed in this literally to-the-death fight.

The character drama between Clark and Lois is also well-developed, and the depiction of the edginess in their relationship keeps the first half of the movie from being a total loss.  This film also includes a strong version of Lex Luthor (Rainn Wilson), one that could have taken over this film.  Ultimately, I am giving The Death of Superman a high recommendation because of the Superman-Doomsday battle.  This fight is like an animated equivalent of a battle one might find in a Disney/Marvel Studios' Avengers films.

Posted by Leroy Douresseaux at 3:24 AM