Review: CANDYMAN 2021 is a Good Horror Movie and an Even Better Black Movie 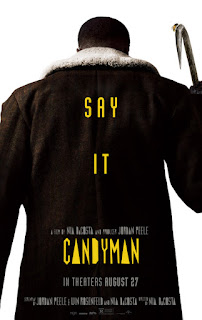 Candyman is a 2021 supernatural horror and slasher film from director Nia DaCosta.  The film is written by DaCosta and Win Rosenfeld and Jordan Peele of Get Out fame.  This new film is adapted from the short story, “The Forbidden,” by Clive Barker and from the 1992 film adaptation of Barker's story, entitled Candyman, which was written and directed by Bernard Rose.  Candyman 2021 is also a “spiritual sequel” to the 1992 film and is set in the now-gentrified Chicago neighborhood where the legend of the notorious and murderous boogeyman began.

Candyman is set in the Cabrini neighborhood on the North Side of Chicago.  Visual artist and painter, Anthony McCoy (Yahya Abdul-Mateen II), lives and his girlfriend, Brianna Cartwright (Teyonah Parris), an art gallery director, live there, navigating the treacherous world of modern art.  But once upon a time, Cabrini was the infamous “Cabrini-Green Homes” (projects), which have now been gentrified beyond recognition.  Still, some sections of the old Cabrini-Green still exist near where Anthony and Brianna live.

Around Cabrini, there is a ghost story (of sorts) about a white woman, Helen Lyle, who went crazy and, among many things, kidnapped an African-American baby.  Anthony meets William Burke, a Cabrini-Green old-timer, and William informs Anthony of Cabrini-Green's true boogeyman, the supernatural killer, Candyman.  The story goes that if someone stares into a mirror and says Candyman's name five times, he will appear and kill that person.

With his art career seeming to stall, Anthony uses the horrific nature of the legend of Candyman as inspiration for a new series of paintings and art.  However, Anthony is unaware that he has unleashed something that will test his sanity and that has a shocking connection to his past.  And the brutal murders have begun.

Candyman is as much about African-American history and folklore as it is about the mythopoeia (mythology) of Candyman.  The writers focus on a world in which Black people, especially impoverished and powerless Black people, are moved around and used as pawns by the White supremacist power structure.  The history of the Cabrini-Green Homes is the perfect example.  For a long time it was low income housing i.e. the projects for African-American tenants, as seen in the original Candyman film.  Beginning in the mid-1990s, Cabrini gradually underwent a process of gentrification, and is now the setting of Candyman 2021.

The White power structure moved Cabrini-Green's poor and working class African-American tenants to other places in our world.  In the world of Candyman 2021, the great boogeyman of poor, Black folks that populated Candyman 1992 has been replaced by an urban legend of a new and incorrect boogeyman – Helen Lyle, who was really Candyman's ultimate victim in the original film.  Candyman 2021 corrects that, restoring Black folklore and stories via Anthony McCoy.

Director Nia DaCosta and her co-writers, Jordan Peele and Win Rosenfeld, as much as they deal with issues of cultural appropriation, Black art, and history, boldly tackle the racist violence of White supremacy, here, brazenly personified as White police officers and as over-policing.  Unlike the first film, which seems to (benignly) suggest that Black victims (Daniel Robitaille) become Black monsters (the Candyman), the victims in Candyman 2021 are mostly less sympathetic than Candyman.

As excellent as I think Candyman is as a “Black film,” it is less so as a horror movie.  The reason is that this new film does not play with the monster/victim dynamic, which the first film did via Helen Lyle and Candyman.  The victims are the bodies of Black folks, as seen in the scandalous shadow puppet animation (created by Manual Cinema) that plays across the end credits.  The monster is White racist and supremacist oppression of African-Americans.  In spite of this film's creepiness and weirdness, I still miss some old-fashioned final girl/slasher killer interplay.

In Candyman 2021, I didn't quite get the horror movie I thought I would get.  I got the Black movie that I very much needed to get.

Read my review of the 1992 Candyman here.

Posted by Leroy Douresseaux at 9:31 PM