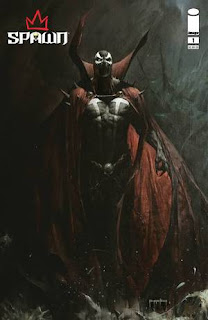 King Spawn is written by Sean Lewis; drawn by Javi Fernandez; colored by FCO Plascencia; lettered by Andworld Design.  King Spawn finds Spawn battling one of his old adversaries, but it is someone only Spawn knows that exists.

King Spawn #1 opens at an elementary school in Seattle, Washington.  There, a bombing kills sixteen people, including fourteen children aged five and six years old.  Spawn and Jessica Priest (She-Spawn) surreptitiously attend the funeral of one of the children, and Spawn, enraged, tells Priest that he knows who committed this crime and that he is going after them.

The suspects include a legendary angel, Metatron, and perhaps, an underground religious group, “Psalms 137.”  Or maybe, the people behind the bombing are fans...

THE LOWDOWN:  I read Spawn #1 back in 1992, and I had mixed feelings about it.  Yet I was a fan and followed the series for another five or six years.

2021 finds me reading my a Spawn title first-issue for the first time since I read Curse of the Spawn #1 back in 1996.  I like the main story in King Spawn #1.  In fact, Sean Lewis has written the best first issue for an ongoing Spawn comic that I have read to date.  His dialogue is sharp and natural-like, which I can't say for Spawn creator Todd McFarlane's dialogue and exposition, which often describes things that we can see in the art.  Lewis' script is lean and mean, and Lewis does something at which McFarlane is quite good – make the reader feel for the victims.

I've always preferred my Spawn comic books to be drawn by McFarlane, but as a businessman from the beginning of Spawn, he really could not commit to drawing Spawn on a regular basis past the first two years of the original series.  However, Javi Fernandez's art and storytelling shares a sensibility with McFarlane's art that will satisfy me.

So far, I find that King Spawn #1 is the closest to what I will get to those early days of Spawn.  Also, the ending makes me want to come back for more.

[This comic book includes four back-up stories and “Spawning Ground” Presents “The Breakdown,” in which Todd McFarlane and Sean Lewis interview each other.]

Posted by Leroy Douresseaux at 2:30 PM