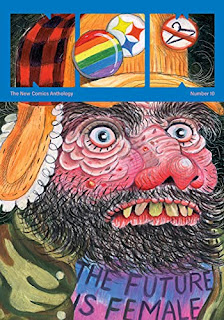 NOW: The New Comics Anthology is an alternative-comics anthology series launched in 2017 and edited by Eric Reynolds.  NOW is published by alt-comix and art comics publisher, Fantagraphics Books.  Over its four-plus decades of existence, Fantagraphics has published what is probably the most diverse collection of comic book anthologies in the history of North American comic books.  That line-up includes such titles as Anything Goes, Critters, Mome, Pictopia, and Zero Zero, to name a few.

NOW: The New Comics Anthology #10 offers a selection of sixteen cartoonists and comics creators, as well as a back cover “comics strip” from Nick Thorburn.  NOW #10 holds to editor Eric Reynolds' creed (from NOW #1) that NOW showcases “...as broad a range of quality comic art as possible...”  This latest edition also includes nine pages of never-before published comics from the late Richard Sala (1955-2020).

The contributors list also includes a Leroy favorite, Noah Van Sciver.  But let's take a look at each of NOW #10's cartoonists' contributions:

THE LOWDOWN:  The illustration that acts as NOW #10's cover art is entitled “Feminist Mountain Man,” and is produced by Rebecca Morgan.  The illustration is what it says it is, with some modern additions, such as a button bearing the logo of the NFL's Pittsburgh Steelers – a sight I always welcome.

“The Counterweight” by Julia Gfrörer:
This beautiful one-page comic is composed of 24 panels that depict the evolution of love and war and the impermanence of a union.  Gfrörer's lovely art also celebrates drawing the human figure in motion.

“The Mobbing Birds: by Tim Lane:
Tim Lane's story, “The Mobbing Birds,” has two things going for it.  The first is its textured, almost photo-realistic art.  The second is having the legendary Hollywood star and cultural icon, Steve McQueen (1930-1980).  The combination of the two create the sense of this story being select scenes from an actual Steve McQueen movie.  “The Mobbing Birds” is like a slice of Americana, probably the dominant theme of Lane's comics, and I find myself fascinated by it.  I wouldn't mind seeing it as a full-length graphic novel, but then, there's the McQueen estate...

“T.D. Ramanujan” by Jacob Weinstein:
This story focuses on T.D. Ramanujan, the administrator of a table tennis federation in the nation of India.  The art reminds me of mid-90s Chris Ware, and the lead character and the setting are quite interesting.  The story's most powerful moments are set during World War II, and the way Weinstein draws the characters makes each one look like a unique figure.  I would certainly like to see more comics set in this milieu.

“No More Or Less Alive” by Steven Weissman:
I have read so many alt-comics anthologies that I am sure I have previously come across Steven Weissman's amazing comics many times.  “No More Or Less Alive” is NOW #10's most explosive, in-your-face story.  A nature story and quasi-animal fable, it is set in “Black Feather Valley” and focuses on a mother gopher fighting a wheat snake for the lives of her seven nursing pups.  If I ever had the words to convey to you, dear readers, the power of this story, I can't find them as I write this.  There must be some literary comics award that will recognize this story as one of the year's best comics.

“Go Big, Then Stay Home” by M.S. Harkness:
Cartoonist M.S. Harkness is also a competitive weightlifter, and this autobiographical comics short story recounts a trip she took with her friend, Elis Bradshaw, a competitive female power lifter.  Early in 2020, Harkness and Bradshaw travel to Columbus, Ohio for a power-lifting event, the “Arnold Fitness Expo,” where Bradshaw will compete, with Harkness there to help.  “Go Big, Then Stay Home” provides an interesting look at the world of power-lifting, but what really amps up the drama is that COVID-19 looms over this story.  Interestingly, the story is set in the last days before the pandemic shutdown so much of public life.

“Real Witches” by Alex Nall & Hartley Lin:
...On the other hand, “Real Witches” is a two-pager that feels complete.  Its 21 panels recall classic 1950s and 1960s newspaper comics concerning the lives and adventures of children, except that “Real Witches” has a strong angle of modern edginess.  If Charles Schulz's Peanuts debuted today, it might look and read like “Real Witches,” another of my favorites from this volume.

“Taffy” by Chris Wright:
“Taffy” is like a demented children's picture book that is entirely inappropriate for anyone to read.  I find it fascinating.  Strangely, “Taffy” reminds me of the work of another cartoonist featured in NOW #10, the late Richard Sala.

“Mellow Mutt” by Noah Van Sciver:
A boy and his toy triceratops and using the imagination to play action heroes:  that's “Mellow Mutt.”  It's silly, funny, crude, and ultimately sad.  What would NOW be like without an offering from the great Noah Van Sciver.

“Free Cone Day” by Celia Varhed:
“Free Cone Day” would be funny even if it weren't painfully true.  When you want something, like a job or a particular career, you can fool yourself to the point of foolish oblivion.  “Free Cone Day” is the kind of superb work of alternative comics that only NOW is original enough to publish.

“Five Shorts”
Richard Sala (1955-2020) was one of the great cartoonists and most unique comics creators of the last four decades.  I have reviewed many of his works and have compared his comics to Charles Addams, Gahan Wilson, and Edward Gorey.  Sala's “pop macabre” sensibilities placed him in the company of contemporaries and of such fellow purveyors of Gothic pop art and entertainment as Charles Burns, Tim Burton, Lemony Snicket, and Guillermo Del Toro, to name a few.

“Five Shorts” is a nine-page suite of never-before published comics from early in Sala's career.  He apparently never even showed them to his friends, according to NOW editor Eric Reynolds.  I thought the world of Sala as an artist and cartoonist, and I exchanged some emails with him back in the Aughts.  I am happy to get this early work in NOW #10.  In them, one can see the beginnings of the graphic style and sensibilities that made Sala an artist whose influence is probably wider than many suspect.

“In This Short Life” by Karl Stevens:
This one-page comic features beautiful, photo-realistic art, and some contemplation.

“Then... But... NOW” by Nick Thorburn:
This is another befuddling back cover strip from Nick Thorburn.  I like it.

So, in conclusion, NOW #10 is the best volume of the series that I have read since I read NOW #1.  It is full of excellent stories, inventive pieces, and beautiful art, but I must choose “No More Or Less Alive” by Steven Weissman as the best of NOW #10.  Like B. Krigstein, Weissman is innovative in the use of the space of a comic book page for “No More Or Less Alive.”

I READS YOU RECOMMENDS:  Fans of classic alternative-comics anthologies will want to discover NOW: The New Comics Anthology.


The text is copyright © 2021 Leroy Douresseaux. All Rights Reserved. Contact this blog for syndication rights and fees.

Posted by Leroy Douresseaux at 5:32 AM