Comics Review: "BARBARELLA Volume 2 #2" is a Thing of Beauty 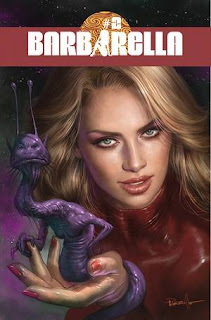 Barbarella is based on the creator created by Jean-Claude Forest

“Agent of Chaos” Part Two: “The Price of Freedom”

When Éric Losfeld collected the serial in a book entitled, Barbarella (via his Èditions Le Terrain Vague), it became the first adult or pornographic comic book.  In 1966, American publisher, Grove Press, published an English-language edition of Losfeld's book as a graphic novel.  After Barbarella was adapted as a 1968 film directed by Roger Vadim and starring Jane Fonda, Grove Press published a second edition of Barbarella using a photo of Fonda as Barbarella as the cover.

In 2017, Dynamite Entertainment began publishing original English language Barbarella comic books.  The latest series is Barbarella Volume 2.  It is written by Sarah Hoyt; drawn by Madibek Musabekov; colored by Ivan Nunes; and lettered by Carlos M. Mangual.  In this new series, Barbarella travels to the planet Camelot to solve a mystery involving slavery on what is supposed to be a paradise.

Barbarella Volume 2 #2 (“The Price of Freedom”) opens with Barbarella, Taln, and Vix, recently arrived on the planet, Camelot.  They need to travel to an island where a nanite signal is causing problems.  It's up to Barbarella to unravel a mystery in order to save a secretly enslaved populace on what is supposed to be a literal paradise.  But what happens when people who don't know they are enslaved are suddenly set free?  It's not what you might think, dear readers...

THE LOWDOWN:  Dynamite Entertainment's marketing department recently began providing me with PDF review copies of some of their titles.  One of them is Barbarella Volume 2, which is the first issue of the title that I have read.  In fact, I have not previously read any of DE's Barbarella comic books, or any Barbarella comics, for that matter.

Barbarella Volume 2 is footloose and fancy free, which is to say that it is a fun read.  First, the art by Madibek Musabekov is fantastic and is some of the best science fiction comic book art that I have seen in a few years.  Actually, that dude draws the heck out this comic, and Ivan Nunes' coloring is a roaring blaze of beautiful red and orange hues.  The lettering by Carlos M. Mangual is, of course, good.  It all comes together to turn this comic book into eye-candy.

Barbarella Volume 2 #2 is a beautiful graphics package.  I honestly did not know what to expect from it, but this intriguing story and the gorgeous art make me want more.  And I'll highly recommend it to you, dear readers.

I READS YOU RECOMMENDS:  Fans of Barbarella will want to try Barbarella Volume 2.

Posted by Leroy Douresseaux at 12:51 PM