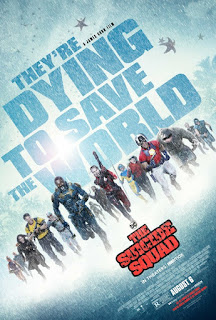 [Overview:  Yes, The Suicide Squad 2021 is the entertaining film that Suicide Squad 2016 should have been, but was not.  And that has as much to do with star Idris Elba as it does with writer-director James Gunn.]

The Suicide Squad is a 2021 superhero and action-fantasy film from writer-director James Gunn.  It is a sequel to the 2016 film, Suicide Squad, and is based on the DC Comics team of antiheroes, Suicide Squad.  The Suicide Squad the film focuses on a team of imprisoned super-villains who are forced to invade a South American island where a deadly creature supposedly resides.

As The Suicide Squad opens, intelligence officer Amanda Waller (Viola Davis) has activated her “Task Force X,” a team composed of dangerous criminals.  Imprisoned in Louisiana's Belle Reve penitentiary, these individuals either possess super-powers, have special abilities, or are some kind of meta-human, humanoid, animal hybrid, or mutant.  All of them are “super-villains.”  Waller chooses thirteen of these inmates and divides them into two teams (unbeknownst to the inmates) and sends them to the small island nation of Corto Maltese, off the coast of South America.

The second more serious team is comprised of five super-villains.  It is lead by a mercenary and hit man with an advanced technological suit and weapons, Bloodsport (Idris Elba), and is comprised of the former military officer who kills for peace, Peacemaker (John Cena); a man who can emit polka-dots, Polka-Dot Man (David Dastmalchian); a female thief who controls rats, Ratcatcher 2 (Daniela Melchior); and a man-eating, human-shark hybrid, Nanaue a.k.a. “King Shark” (Sylvester Stallone).

Once on Corto Maltese, Task Force X has to reach a structure called “Jötunheim.”  It houses a laboratory built on the island decades ago by exiled Nazi scientists so that they could continue their monstrous experiments.  Now, Jötunheim apparently houses a secret program known as “Project Starfish.”  At the heart of this project is something referred to as “the beast,” and to destroy this project, the members of this squad will show why the nickname for Task Force X is “The Suicide Squad.”

First, I can say that The Suicide Squad is a much better film than its predecessor, Suicide Squad (2016), which was probably made problematic by Warner Bros. Pictures executives making bad decisions about it.  In The Suicide Squad, writer-director James Gunn offer his audience gleeful and extreme violence, insane set pieces, and snappy dialogue.  However, Gunn is also very good at creating engaging character drama that allows even the most troubling characters to have a journey in which he or she experiences a poignant or uplifting heroic arc.  In this case, Bloodsport (kinda) transforms from selfish, killer asshole into an anti-hero who cares … about a few things and people … and a rat.

Other characters more or less have a similar arc, although Margot Robbie's Harley Quinn is as crazy, as homicidal, and as sweet as ever.  Joel Kinnaman's Rick Flag, a holdover from the first film, is a much more interesting and likable character.  Viola Davis' Amanda Waller is darker, maybe even more … evil than ever, and Storm Reid delivers a surprisingly deft turn in a small role as Tyla, Bloodsport's daughter, who appears in two scenes.  David Dastmalchian steals a few scenes as the surprisingly endearing Polka-Dot Man.  Overall, the characters are both more interesting and much more appealing and fun than the characters in the first film.  I say that although in the new film, the Suicide Squad is much more homicidal.

Gunn makes sure The Suicide Squad feels irreverent and outrageous and pours on the ultra-violence, and most of the time, it works.  Sometimes, however, it feels like Gunn is trying too hard, and the violence is either gross or is so over the top as to come across as lame.  Gunn is known for writing and directing Disney/Marvel Studios' Guardians of the Galaxy films.  However, I think Gunn was trying to make The Suicide Squad like 20th Century Fox's Deadpool films, which are gleefully violent and shameless and infused with droll humor.  However, the Deadpool movies have Ryan Reynolds, who has mastered his own brand of (sometimes) endearing comedy that is witty, sarcastic, sardonic, silly, and stupid.  There is no Ryan Reynolds om The Suicide Squad, so the film can seem a little desperate in its bid to be crazy and cool.

However, The Suicide Squad does have Idris Elba, and if not for him, James Gunn would have ended up with a Suicide Squad film that works about as well as David Ayers' Suicide Squad film.  Elba, as the world-weary, but supernaturally skilled killer, Bloodsport, plays the complicated anti-hero turned action hero with his usual understated grace and commanding screen presence.  The Suicide Squad is bonkers, inventive, and imaginative – thanks to James Gunn.  However, it is a superhero fantasy and action thrill machine because of Idris Elba.