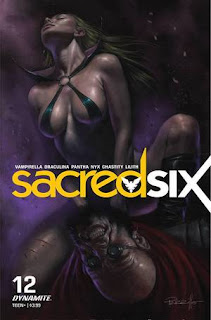 Sacred Six is a comic book series from writer Christopher Priest and is also a spin-off from Priest's run on Dynamite Entertainment's Vampirella comic book.  The series focuses on a group of supernaturally powerful women involved in a struggle between two neighboring towns.  Sacred Six is currently written by Priest; drawn by Marcos Romas; colored by Mohan; and lettered by Willie Schubert.

Sacred Six is set in Victor County, Georgia and focuses on two towns.  Impoverished Ashthorne is populated by an enclave of peaceful vampires who do not prey on humans.  The City of Sacred is the home of an evil organization known as “The Six,” which manufactured Sacred for the specific purpose of wiping out the vampires of Ashthorne.  Four women:  formerly known as Victory, Draculina; the eternal Pantha; the fire demon, Nyx; and the half-vampire bounty hunter, Chasity, are lured to rural Georgia as part of a mysterious scheme to defend Ashthorne.  However, Ashthorne has a deadly secret, and Sacred has a deadly purpose.  Lurking in the shadows is Lilith, the immortal sorceress and mother to Vampirella, who occasionally joins the festivities to form another version of the “Six.”

Sacred Six #12 (“Armageddon”) opens in the City of Sacred, and the refugees from Ashthorne are at the mercy of the forces of Leviticus.  An agent of the City of Sacred, Leviticus is hellbent on serving Heaven by destroying the monsters and other undead denizens of hated Ashthorne.  The Six have something to say about that, although some of them are busy transforming or revealing secrets.

Will the others members of the “Six” arrive in time?  Plus, the mystery of the Gardener is revealed.  And why have an ending when you can have a beginning?

THE LOWDOWN:  Dynamite Entertainment's marketing department recently began providing me with PDF review copies of some of their titles.  One of them is Sacred Six #12, which is the second issue of the series that I have received.

I needed to do some Internet research in order to understand issue #11, but I enjoyed it anyway.  I have a better handle on Sacred Six #12, and I find the series to be a bit more humorous than I expected.  I am a longtime fan of writer Christopher Priest, who has been a comic book writer for decades.  He is having fun with this final issue, and its ending suggests that there could be more.  Sacred Six could end up being an interesting quasi-superhero title.

The art by Marcos Ramos is stylish, and it seems appropriate for several genres, not just this action-horror-dark fantasy series.  Mohan's consistent coloring keeps the wild swings in mood and settings from tearing the story apart, and Willie Schubert's lettering grounds this story, so the plot swings don't end up doing the tearing.

Because Christopher Priest wrote this, I'll recommend it.  I bet the trade paperbacks will make for some good reading, and I hope we get more Sacred Six.

I READS YOU RECOMMENDS:  Fans of Vampirella and of writer Christopher Priest will want to try Sacred Six.