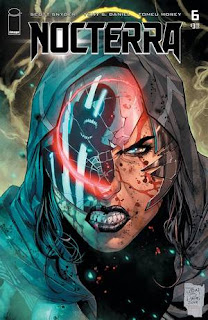 Nocterra is a horror and science fiction comic book series from writer Scott Snyder and artist Tony S. Daniels.  Published by Image Comics, Nocterra is set on an Earth that has been experiencing an everlasting night, the “Big PM,” since the sky went dark and the world was plunged into an everlasting night over a decade ago.  Colorist Tomeu Morey and letterer Andworld Design complete the series' creative team.

Valentina “Val” Riggs – call sign “Sundog,” – was in the fifth grade the day the “Big PM” occurred.  Thirteen years later (“13 PM”), Val drives a big rig hauler, a heavily-illuminated 18-wheeler known as the “Sundog Convoy.”  A skilled “ferryman” Val transports people and goods along deadly unlit roads between the few remaining human outposts, and now she has her most dangerous haul – Bailey, a girl with a dangerous secret and her brother, Emory “Em” Riggs, who is becoming a Shade.

As Nocterra #6 opens, Val is back in those early days of sanctuary, when she saw the true killing ability of the “Smudges,” the name for a human Shade.  Val has found safety in the mysterious Sanctuary, having brought Bailey to Tiberius McCray, the leader of Sanctuary and the brother of her grandfather, Augustus McCray.

Now, however, the calm has given way to the storm, and Val is surrounded by shocking revelations.  She must prepare for both battle and for survival afterwards for herself, Bailey, and Emory.  Can she see past the darkness into the light?

THE LOWDOWN:  As I have written in some of my earlier reviews of Nocterra, I enjoy writer Scott Snyder's creator-owned series.  I have also told you, dear readers, that I am usually happy to read a comic book drawn by Tony S. Daniels, going back to his early days writing and drawing creator-owned titles at Image, such as The Tenth.  Nocterra has justified my devotion, and this sixth issue ends the series' first story arc with a tremendous payoff for readers who stuck around after the first issue.

Like issue #5, Nocterra #6 gets all thematic, and like the fifth issue, the sixth is the best of the series.  This new issue expands the world of Nocterra in one fell swoop, and the potential for this narrative's long haul excites me with the possibility of new places and so many new dangers.

I don't want to spoil anything, but Snyder, Tony Daniel, Tomeu Morey, and Andworld Design are doing some of their best work as a killer creative team of this amazing title.  Science fiction, dark fantasy, horror, family drama, action:  Nocterra is terribly good, dear readers, equally exiting and mysterious, at all times.  The trade collection for the first arc arrives in October, so take that chance to start at the beginning and then, run on up to catch up with us, the regulars of Nocterra.