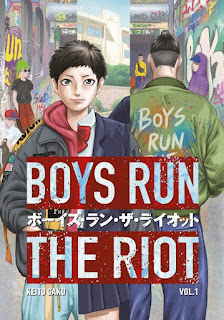 Boys Run the Riot is a Japanese manga series written and illustrated by Keito Gaku.  It began serialization in Kodansha's Weekly Young Magazine in January 2020, and then moved to Kodansha's “Comic Days” manga app in September 2020.  Kodansha Comics began publishing an English-language edition of the manga as a four-volume trade paperback original series in May 2021.  Each volume of Boys Run the Riot will also be available digitally upon release across all our participating digital vendors including Bookwalker, comiXology, Google Play, Kindle, Nook and izneo.

Boys Run The Riot, Vol. 1 (Chapters 1 to 7) introduces Ryo Watari, a second year high school student.  Ryo knows that he is transgender, but he does not have anyone in which to confide about the confusion he feels.  He can’t tell his best friend, Chika, who only sees Ryo as a girl who likes to dress as a boy.  He can't tell his mother, who is constantly asking Ryo why he “dresses like a boy.”  He certainly can’t tell Jin Sato, the new transfer student who looks like just another bully and a delinquent.

Ryo is into “street fashion,” and the only time he feels at ease is when he is wearing his favorite clothes.  It is then and only then that the world melts away, and Ryo can be his true self.  However, one day, while out shopping at a “pop-up” store, Ryo sees someone he didn’t expect, Jin.  The new student who looked so tough in class has the same taste in fashion as Ryo!  Ryo has someone with whom he can be open, but it is never that easy – especially when uniting with another outcast can make you even more of an outcast.

THE LOWDOWN:  Earlier this summer, I came upon either a review or an advertisement that alerted me to the existence of Boys Run the Riot.  I liked the title, and also, I have been curious about manga featuring transgender characters since I first read Shimura Takako's trans manga, Wandering Son Volume 1 (Fantagraphics Books), back in 2011.

Boys Run The Riot Volume 1 does an amazing thing.  From the moment I started reading, I only thought of Ryo as a boy.  Creator Keito Gaku only ever presents Ryo as a high school boy, and midway through the first chapter (entitled “Encounter”), Ryo declares to Jin, “I'm a guy on the inside!”  At that point, the narrative makes conveys the fact that Ryo is a guy through and through – at least to me.

I like Guka's art with its expressive faces and large, emotive eyes on the characters.  Ryo and Jin's street fashions fit them so naturally and with a sense of ease.  Guka's graphical storytelling feels at ease, but it is also capable of sudden changes and explosive displays of emotion.  Ryo and Jin's friendship is an evolving relationship, and there are plenty of bumps along the way, especially because Jin likes to tease and provoke.

Leo McDonagh's English-language translation perfectly fits the art and storytelling, while Ashley Caswell's lettering captures the many moods of the chapters contained in this first volume.  I thought that I would like Boys Run The Riot, and this first volume makes me want to read more.  The final chapter of Vol. 1 (Chapter 7: “Riot”) sets up some interesting things to come.

I READS YOU RECOMMENDS:  Fans of transgender manga, of high school-set manga, and of comics about fashion will want Boys Run The Riot.

Posted by Leroy Douresseaux at 9:59 PM