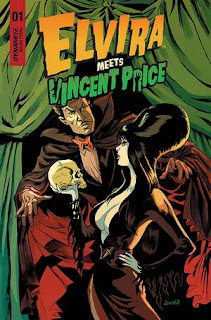 Chapter One: “The Price is Right!”

Elvira and Vincent Price team up for the first time in the comic book miniseries, Elvira Meets Vincent Price.  The series is written by David Avallone; drawn by Juan Samu; colored by Walter Pereyra; and lettered by Taylor Esposito with Elizabeth Sharland.  The series finds Elvira and Vincent searching for a long-lost movie in order to save the world.

Elvira Meets Vincent Price #1 opens after the events depicted in Elvira: The Omega Ma'am.  [This is a Kickstarter comic book that shipped to campaign supporters the first quarter of this year.]  Elvira and her writing partner, Eddie Mezzogiorno, are in the offices of a powerful streaming service.  The duo is (desperately) pitching ideas for new “Elvira” television series with no luck.  In fact, things have been a bit dark of late for the “Mistress of the Dark,” with the possibility of darker still to come.

After a night of drinking, Elvira experiences an intense dream-vision in which her “favorite all-time movie star” – living or dead – appears.  It's the late, but still great Vincent Price!  He needs Elvira's help to find a lost movie of his, but this match made in cinematic-Hades seems to have the forces of darkness aligned against them.

THE LOWDOWN:  I have been a fan of writer David Avallone's Elvira comic books for a few years now.  When Avallone is teamed with artist Dave Acosta, they deliver hugely-entertaining Elvira comic books; they are the “Misters of the Dark.”

For Elvira Meets Vincent Price, Avallone teams up with talented Spanish artist, Juan Samu, who has drawn Marvel Action Black Panther and Transformers comics for IDW Publishing.  Here, Samu's layouts and page designs deftly capture the wild mood swings of this first issue – from the banality of office spaces to the mirthful macabre of Elvira's dwellings and from the fever dreamscapes of Elvira to the crusty outback of the California film making industry.  Samu is also a man of a thousand facial expressions, as he is always conveying different character tempers and humors, panel per panel.  Walter Pereya's colors add a quality to the storytelling that is both lurid and dreamlike.

David Avallone's script is filled with sparkling and witty dialogue, the kind of which DC Comics' Harley Quinn comic books so desperately need.  Reading Avallone's dialogue for Vincent Price certainly made my imagination believe that Price was actually speaking.  The interplay of bold and plain text in the lettering by Taylor Esposito and Elizabeth Sharland balances the need for the script to be funny, and it also advances a plot.

So I encourage everyone looking for (really) funny macabre comedy to purchase and read Elvira Meets Vincent Price #1.  I want a sequel to this series, already.

Posted by Leroy Douresseaux at 12:32 PM