Review: "JUSTICE LEAGUE VS. THE FATAL FIVE" is Recalls a Classic Era 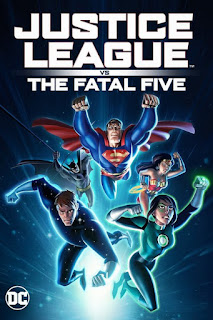 Justice League vs. the Fatal Five is a 2019 straight-to-video animated superhero film from Warner Bros. Animation and director Sam Lui.  It is the thirty-fourth film in the DC Universe Animated Original Movies series.  The film is based on the classic DC Comics superhero team, the Justice League.  The story pits the Justice League and an amnesiac hero against a powerful group of villains from the future.

Justice League vs. the Fatal Five opens in the 31st century.  There, three members of the villainous “Fatal Five”:  Mano (Philip Anthony-Rodriguez), Tharok (Peter Jessop), and The Persuader (Matthew Yang King) attack the Legion of Super-Heroes' headquarters in order to steal the Legion's time sphere.  Legionnaires Star Boy (Elyes Bagel), Saturn Girl (Tara Strong), and Brainiac 5 (Noel Fisher) try to stop them, but fail.  Just as the villains activate the sphere, Star Boy leaps at sphere and is taken back into the 21st century with it.

In the 21st century, the members of the Justice League:  Superman (George Newbern), Wonder Woman (Susan Eisenberg), Batman (Kevin Conroy), and Mr. Terrific (Kevin Michael Richardson) are working on getting new members.  Batman is a mentor of sorts to Miss Martian (Daniela Bobadilla), and Wonder Woman is trying to recruit the new Green Lantern of Sector of 2814, Jessica Cruz (Diane Guerro), who is reluctant as she is still suffering from the trauma of a near-death experience.

Soon, the League finds itself in a battle with the trio of Mano, Tharok, and The Persuader, who turn out to be formidable foes.  They have some kind of connection to Star Boy, who has been suffering from memory loss sense he arrived on Earth and is currently a patient in Arkham Asylum.  Whatever these three members of the Fatal Five want, it involves Jessica Cruz, and if she resists their demands, it could lead to mass casualties across the world.

The “DC Animated Universe” (DCAU) is a shared universe of superhero-based animated television series that were produced by Warner Bros. Animation and was based on characters that appeared in DC Comics publications.  The first DCAU TV series was “Batman: The Animated” series, which debuted in September 1992, and the last was “Justice League Unlimited,” which aired its last new episode in May 2006.  Four animated feature films that fit into the DCAU were produced during that original 14-year time period.  Bruce Timm, a writer, producer, character designer, and director of films and animated television series, can be described as the chief architect of the DCAU.  He considers two other animated feature films to be part of the DCAU.  One is 2017's Batman and Harley Quinn, a continuation of the TV series, “Batman: The Animated Series” and its follow up, "The New Batman Adventures" (1997-99).

Although I have not seen all of its films and TV series, I am a fan of the DCAU, so I was glad that both in the design of the animation and in the spirit of the narrative, Justice League vs. the Fatal Five seems like an extra-long episode of “Justice League Unlimited.”  Having DCAU voice cast regulars, Kevin Conroy (Batman), Susan Eisenberg (Wonder Woman), and George Newbern (Superman), reprise their roles is simply wonderful.  Having one of my favorite writers of animated films, Jim Krieg, work on this this film is a satisfying bonus.

I think Jessica Cruz's story arc and heroic journey make this film such a strong drama.  However, I think Star Boy's story arc is poorly developed; there are times in this film when the character is quite frankly extraneous, which makes his final sacrifice seem hollow in the narrative.  Strangely enough, I really like Elyes Gabel's voice performance as Star Boy.

I like all the voice performances in Justice League vs. the Fatal Five, and, for the most part, the actors make the characters' personalities, conflicts, and conniving seem genuine.  The action sequences are some of the best I've seen in a DC Universe Animated Original Movie.  I highly recommend Justice League vs. the Fatal Five to fans of these movies and especially to fans of the DCAU.  I could have watched another two hours of it.