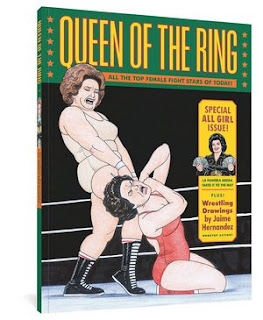 Fantagraphics to Publish QUEEN OF THE RING: WRESTLING DRAWINGS BY JAIME HERNANDEZ (1980–2020)

SEATTLE, WA - For the past four decades, Jaime Hernandez has been creating some of the most beloved graphic novels of all time. He’s been honored as a member of the Will Eisner Hall of Fame, and he’s received the prestigious PEN Award, an L.A. Times Book Prize, and numerous Harvey, Ignatz, and Eisner Awards. But what does the lifelong Angeleno do to relax? He draws ― and, for more than forty years, he has been drawing and privately amassing a body of work that no one else has seen. Until now.

This August, Fantagraphics will publish QUEEN OF THE RING: WRESTLING DRAWINGS BY JAIME HERNANDEZ, featuring 125 never-before-published illustrations that celebrate the women who are often ignored in pro wrestling. Through a series of pin-up pages, action shots, and fake wrestling magazine covers, Hernandez introduces an all new cast of fictional characters: the beautiful and brutal Bettie Rey; the I.F.W. Pacific Women’s Champion ― a.k.a. Golden Girl; former champions Pantera Negra and Miss Kitty Perez; and many more― all presented in a large hardcover format that echoes the wrestling magazines of the 1960s and 70s. We celebrate their victories and witness their defeats. The years pass by, the women age, and new champions are crowned. As Hernandez says, “It’s my Love and Rockets world that’s not my Love and Rockets world.”

“Jaime’s already created one of the most expansive and remarkable casts of comic book characters of all time in his Love and Rockets stories,” said Fantagraphics Associate Publisher Eric Reynolds. “It’s a testament to his gifts as a storyteller that he’s created a second cast of memorable characters, and it’s our good fortune that he’s decided to share this private world he’s been creating for four decades with all of us.”

“Even in his drawings of women that were never meant for public consumption, there is a wealth of compassion and charm, and a depth of world building and storytelling,” said the book’s editor, Katie Skelly. “I’m so honored to be able to bring this work to the world. My hope is that these drawings will shed light on Jaime’s remarkable studio practice, as well as spread his infectious enthusiasm for the world of women’s wrestling.”

Queen of the Ring is available for order now via Fantagraphics: fantagrapics.com/queen-of-the-ring

About Fantagraphics:
For over 45 years, Fantagraphics has published the very best comics and graphic novels that the medium has to offer. Our mission is to celebrate great cartooning in all of its incarnations, from the form’s early luminaries to contemporary artists currently forging the future of visual storytelling. Not content to rest on our laurels and extensive roster of talented artists, we constantly seek out fresh voices from across the globe. Thus, we honor the rich history of comics while providing a platform for bold new stories, styles, and perspectives that push the boundaries of the medium. Fantagraphics remains peerless in our commitment to be the publisher of the world's greatest cartoonists.