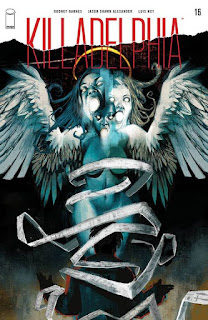 “Home is Where the Hatred Is” Part IV: “Have a Little Talk with God”

As Killadelphia #16 (“Have a Little Talk with God”) opens, Jupiter and the now vampire former President Thomas Jefferson have a long-awaited confrontation.  But after the harsh words, can they (vampire) kiss and make up?  Meanwhile, Tevin chats up Anansi, and boy, does God have a mouth on him.  Can Anansi bring Jim, Jr. back from the world of the creatures of the night to the world of the living, and if He can, why should He?

THE LOWDOWN:  Killadelphia moves into the second half of its third story arc, “Home is Where the Hatred Is.”  Perhaps, this is the story arc that most reveals the complexities and multiple layers of Killadelphia, making it more dark fantasy than mere vampire comic book.

Twisting and turning the narrative with sharp-teethed glee, writer Rodney Barnes won't let anything lie.  Nothing is as it should be or as we would expect it to be.  So Killadelphia #16 is one of this series' best issues … if not the very best.  Barnes is also all sharp elbows with uncomfortable truths – like the Brad Pitt reference Anansi drops.

As with the previous issue, artist Jason Shawn Alexander and colorist Luis Nct dance through Barnes' script, bringing each scene or sequence into life with its own unique look.  The graphical storytelling seems to evolve with the story, the lurid and the surreal side by side and proudly delivering the unexpected.

Wow, the bitter and resentful would call Killadelphia #16 “woke,” but truth defends itself very well.  And sometimes, some of us should realize that history is your story and maybe it is a tale telling more than some of you wanted.  Yes, I have a vampiric thirst for Killadelphia, and you, dear readers, can have that, also.