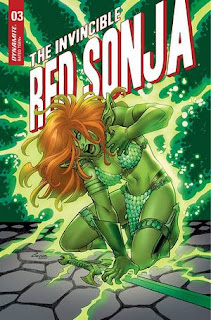 [Note on the cover art: As far as I could find out, the numbering is wrong and this is cover of "The Invincible Red Sonja #4.]

As The Invincible Red Sonja #4 opens, the She-Devil with a Sword watches as Bahira Yakootah, the Lord of Thieves, summons demons from molten lava in his mission to kill the King of Erkhara.  In her bid to stop him, however, Red Sonja, commits a fatal act that determine her fate.  Now, death descends on Erkhara, Erkhara destabilizes, and Sonja may find herself even worse off.

THE LOWDOWN:  Dynamite Entertainment's marketing department recently began providing me with PDF review copies of some of their titles.  One of them is The Invincible Red Sonja #4, which is the first issue of the series that I have read, but this is not my first experience with the character.  I have actually read various Red Sonja titles over my time as a comic book fan, including a few recently published by Dynamite.

Under a gorgeous cover drawn by Amanda Conner and colored by Paul Mounts, Conner and Palmiotti deliver a surprisingly rousing story.  Although it is but one part of a story arc, this fourth chapter is quite entertaining by itself.  This is one of the best Red Sonja comic books that I have ever read, and I am certainly enjoying this more than I do Conner and Palmiotti's Harley Quinn comic books.

Moritat's illustrations remind me of the art of the late Vaughn Bode.  Moritat's graphical storytelling is over the top in a way a Red Sonja or Conan the Barbarian comic book should be, and the characters' emotions also leap off the page.  Matt Carter's colors give the story some edge and also seem to quicken the pace of the story, along with Dave Sharpe's letters.

Honestly, I did not expect much from The Invincible Red Sonja #4, but now, I gotta have more.  It's like my sword and sorcery crack.  I'd do anything … for another issue.

Posted by Leroy Douresseaux at 3:55 AM