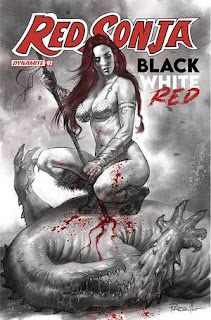 Red Sonja remained a fixture in comic books from then until about 1986.  In 2005, Dynamite Entertainment began publishing comic books featuring differing versions of the character.  One of those is Red Sonja Black White and Red, an anthology comic book featuring stories from well known comic book writers and artists, with the art presented in black, white, and red.

Red Sonja Black White and Red #2 is comprised of three stories.  The first is “Proelium Finalis” by Jonboy Meyers and Patrick Brosseau.  Next is “Edible” by Jeff Parker and Natalie Nourigat.  The final story is “Listen Close” by David F. Walker, Will Robson, and Hassan Otsmane-Elhaou.  I'll review each story separately.

THE LOWDOWN:   Dynamite Entertainment's marketing department recently began providing me with PDF review copies of some of their titles.  One of them is Red Sonja Black White and Red #2, which is the first issue of the title that I have read.  I have seen listings for it, but did not pay attention.

“Proelium Finalis” by Jonboy Meyers and Patrick Brosseau:
The plot involves “The Lemurians” who return from the bowels of the Earth in a bid to end both the Hyborian Age and the world of man.  They are led by the wizard, Kael Al-Ammon, but the humans are led by Red Sonja.

Meyers makes sure that Red Sonja's hair is red, but otherwise, he uses the color to splash across the pages of his sharp artwork in order to signify violence and gore. “Proelium Finalis” is a beautifully drawn comic book short story, but I'd like to see the team of Meyers and Brosseau smash us in the face with a miniseries version of this.

“Edible” by Jeff Parker and Natalie Nourigat:
The story introduces a tribe of humans that have settled in a valley with which they were not familiar.  Near the valley is a bog, and members of the tribe have gone into the bog and never returned.  The latest missing tribesman is a girl named Tanira or “Tan,” for short.  Once in the bog, Red Sonja discovers that a strange, seemingly unbeatable organism rules the area.

“Edible” is a clever story, and it is probably the closest that anyone will come to an all-ages Red Sonja story that is actually a Red Sonja story.  The pretty art is drawn by Natalie Nourigat in a clean style that readers will generally find in children's comics.

“Listen Close” by David F. Walker, Will Robson, and Hassan Otsmane-Elhaou:
“Listen Close” is a bedtime story about Red Sonja.  An African-American father tells the story to his red-haired daughter, who wants to be “just like Red Sonja.”  The “She-Devil with a Sword” has been summoned by King Assuman, who promises her great riches if she can rescue his bride-to-be, Ophelia, from a “vile creature.”  But there is more to this rescue mission than Red Sonja has been told...

“Listen Close” is this issue's second clever tale, and it is also blessed by Will Robson's ornate art with its detailed composition.  David F. Walker, who is currently known for his comic book, Bitter Root (Image Comics), offers a nice middle-grade appropriate Red Sonja tale.

It's hard to pick a favorite story of the three offered in Red Sonja Black White and Red #2.  Each story has at least one thing about it that I really like, so I'll just recommend the entire issue.