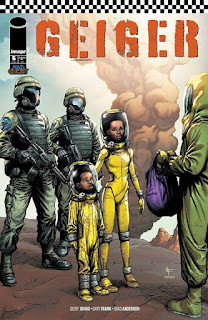 Geiger #5 (“God Bless America”) opens with a recitation of the story up to this point.  Then, after a hard encounter with “the Organ People,” Geiger is in a state of radioactive disarray, and the children, Hailee and Henry, are in the custody of remnants of the old world.  These mysterious new figures are excited to now have the “nuclear football” that was in the children's possession, but they want to know how their late mother, Carolina, came to have it.

When a heartbreaking revelation causes Geiger to break with this happy paradise, their new pals call upon an ancient warrior.  Meanwhile, the King, formerly “the Prince,” and his “Nuclear Knights” continue to track Geiger.

THE LOWDOWN:  As first issues go, Geiger #1 was mostly an introduction, kind of like a prologue.  It introduced the title character, Geiger, giving readers a look at who he was in the past and a glance at who he is now.  Geiger #2 went inside Las Vegas.  With Geiger #3, Geoff Johns began to excavate the heart of the character drama and the passion of old grudges and conflicts.  With Geiger #4, Johns executed his first game changer – in terms of Geiger and the children's fates – and readers got a Mad Max 2/The Road Warrior action sequence.

Geiger #5 is the penultimate issue of the series' first story arc.  Geoff Johns offers the series' most emotionally fulfilling chapter, and he elevates the children from mere pawns into major characters that deliver turning points in the narrative.

As in the third issue, Gary Frank's art captures the emotions and passions of intimate moments and of pivotal scenes in Geiger #5.  The storytelling pours the hotter blood of the relationships of the past that shape the present of Geiger's narrative.  Close-ups are painfully familiar, but that makes this fifth issue in which things seem to matter the most.