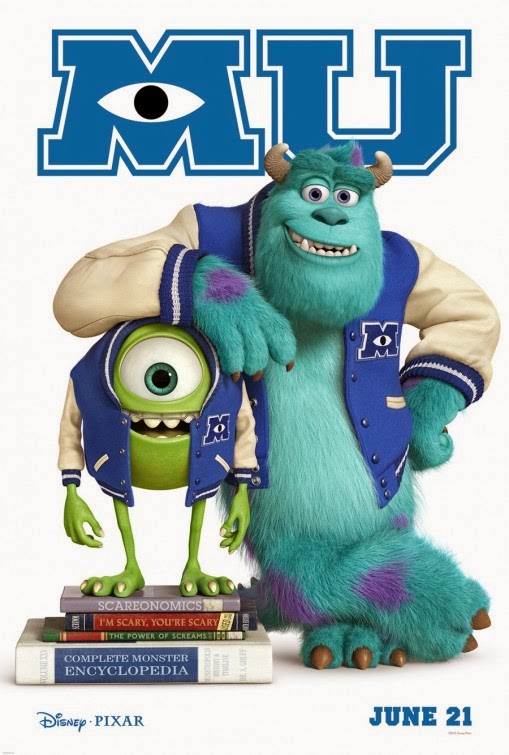 Monsters University focuses on the stars of the original film, Mike and Sulley.  The movie looks at the early days of their relationship during their time in college, telling the story of how they went from rivals to friends.  Although it is not quite as good as the original, Monsters University is a warm and fuzzy and sweet and sentimental film that offers a return of one of the great comedy duos of animated films, Mike (ostensibly this movie’s lead character) and Sulley.

Monsters University introduces Michael “Mike” Wazowski (Billy Crystal), a young monster who dreams of being a “scarer,” a monster who enters the human world at night to scare children.  He enrolls at Monsters University, believing that is the best place to learn to be a great scarer.  Mike meets a large, blue furry monster named James P. “Sulley” Sullivan (John Goodman), a privileged student from a family of renowned scarers.  The two immediately dislike each other.

Sulley joins the school’s premiere fraternity, Roar Omega Roar (ROR).  Mike has to settle for Oozma Kappa (OK), a fraternity of geeks and outcasts.  An incident between Mike and Sulley puts the two on the fast track to trouble.  Mike decides that the Scare Games, a competition between Monsters University’s select fraternities and sororities, can save his and Sulley’s college careers.  First, the two rivals will have to learn to trust each other and their new Oozma Kappa friends.

The two best things about Monsters University are the delightful supporting characters that are members of Oozma Kappa and the Scare Games.  I found those supporting players to be endearing, and the film gives just enough of them to make you feel that you didn’t get enough.  The Scare Games are exciting and have a great ending, which a subsequent plot twist kinda ruins.

When Monsters Inc. first appeared in 2001, it was novel, maybe even groundbreaking in a way.  All Monsters University can be is a welcome return of old friends, and that’s good enough.


Posted by Leroy Douresseaux at 8:47 AM