Review: "The Matrix Revolutions" is the Good with the Bad 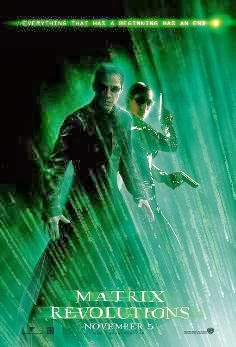 The subject of this movie review is The Matrix Revolutions, a 2003 science fiction action movie from filmmaker siblings Andy and Larry (now Lana) Wachowski.  It is the third film in The Matrix film franchise, and it is both a direct sequel and continuation of The Matrix Reloaded, which was released six months earlier.  The Matrix Revolutions focuses on two main plots:  the attempt by the human city of Zion to defend itself against a massive invasion of machines and also Neo’s fight to end the human-machine war by battling the rogue Agent Smith.

The Matrix Revolutions end The Matrix trilogy not with a bang but with a whimper, a dud, and a plop.  It’s largely a bore, and, while not as talky as the first, the film drags like a wet rag when it does try to be all philosophical.  Like Once Upon a Time in Mexico, The Matrix Revolutions is an average, meandering, dull film made by very talented filmmakers who know how to use all kinds of gadgets to make movies, but can’t tell a good story.  TMR tries to resolve all the plotlines, while cheekily leaving just enough unresolved to suggest that it is a never-ending story or, at least, that there will be more movies born of this immense cash cow.

The machines finally invade Zion, and human inhabitants of the underground sanctuary are wildly overmatched.  Meanwhile, Neo (Keanu Reeves) not only has to battle Agent Smith (Hugo Weaving), who has become a self-replicating virus that is rapidly taking over the Matrix, but Neo also has to travel to the Machine City and make a peace deal with the machine central intelligence.  The Oracle (played by Mary Alice, as the original, Gloria Foster, died during filming of the second film), an important (but minor character), plays a larger role in Revolutions as she tries to save the Matrix from all the various rival programs that are attempting to have their own way in the artificial construct into which most of humanity is jacked.

Press for the film is telling audiences that The Matrix Reloaded was about life and that this last film Revolutions is about death.  There is death here, but it’s mostly in a lame script and poorly executed concept.  The ideas behind The Matrix are grand and interesting.  The writer/directors Larry and Andy Wachowski, however, just don’t always know quite how to find that straight line that goes from concept to final product.

Revolutions is dry and slow, and the mish mash stew of Eastern philosophy and computer jargon is tasteless.  The cinematography by Bill Pope is lush a landscape of rich and sexy, dark watercolors.  The battle between the humans and sentinels in Zion is a spectacular blend of CGI, bravura editing, and human emoting that might not have viewers comparing it to the battles in Braveheart or Saving Private Ryan, but those familiar with video games will recognize this as the most awesome sci-fi battle put on film to date.  The leather bar segment and the final duel between Neo and Agent Smith are also fairly spectacular.

If anything, we can always remember The Matrix films for their groundbreaking and mind bending visual effects.  There truly is no doubt that these films are three of the most important movies films in advancing the technology and craft of movie making.

If you’ve seen the other two, there’s no point in not finishing this.  The Matrix Revolutions, however, is a mediocre movie.  The surface pyrotechnics are just fine, but the meat and bones of the film – the story, is weak and lousy; in the end, this is not a tale, but a collection of cool scenes that would be right at home in a video game.

This is the film result of two indulgent filmmakers who needed to be reigned in before their egos and unchecked imaginations went wild and made crap.  Sometimes, someone, even a studio executive – a suit, needs to harness the madness of young filmmakers.  They owe the audience that much.  It’s not at all acceptable that the price of admission buys the messy product of two directors who needed to take their fantasy back to the drawing board one more time.


Posted by Leroy Douresseaux at 9:48 AM