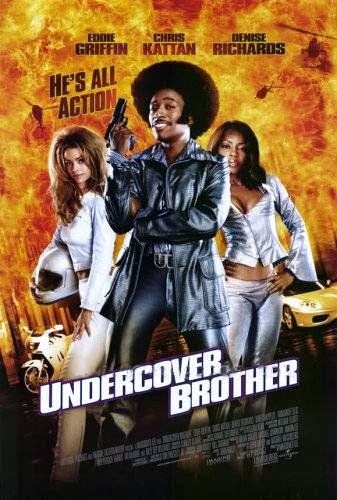 The subject of this movie review is Undercover Brother, a 2002 comedy and action film from director Malcolm D. Lee.  The movie is based on an original Internet animated series created by screenwriter John Ridley.  The movie spoofs 1970s blaxploitation films and also James Bond movies via the character “Undercover Brother.”  Undercover Brother the movie focuses on a group of secret agents trying to stop “The Man” from derailing an African-American candidate’s presidential campaign.

As a comedy, Undercover Brother, a broad parody of black exploitation films and 70’s Afro-American pop culture, focuses on its characters rather than its simple storyline and straightforward, but thin plot.  A light plot is a treacherous path for a film; especially in light of how uneven previous blaxtiploitation parodies were, focusing almost entirely on skewering preconceptions rather than telling a story.

This includes Hollywood Shuffle and I’m Gonna Git you Sucka.  Both films rapidly ran out of steam, and Shuffle, which also skewered stereotypes of black people in mainstream Hollywood films, struggled with being both a comedy and social satire.  Sucka tried to be both a parody and a conventional action movie (or it certainly seemed that way) and often failed on both counts.

Undercover Brother doesn’t have any of those problems because it’s a straight yuck fest.  Any social commentary on the relationships between the skin colors is either simply coincidental or so slyly and quickly interjected that the audience will either miss it or ignore it.  Director Malcolm D. Lee (Spike Lee’s cousin and the director of The Best Man) carefully navigates the dangerous straits that are parodies.  He keeps things moving, and with a script that makes almost every word an integral part of a joke, he doesn’t have to deal with nuisances like character development.  I do have to give the film credit because the jokes are little sharper than they appear.  It’s like the mainstream gets to join the mostly black cast for the laughs, but it’s as if the creators aren’t letting them in on the entire joke because “they” might be the punch line.

In the plot, a lone black agent, Undercover Brother (Eddie Griffin), joins B.R.O.T.H.E.R.H.O.O.D., an organization engaged in a secret war against The Man (voice of J.D. Hall), an evil figure who wants to reverse the influence of African-Americans on white American culture.  The Man also wants to derail the candidacy of a promising black presidential hopeful (Billy Dee Williams) by controlling his mind.  Undercover Brother must also face off against The Man’s main henchman, Mr. Feather (Chris Kattan).  Crazed and struggling with own attraction to hip-hop culture, Mr. Feather unleashes the one weapon sure to bring a brother down, an attractive white woman in the form of White She Devil (Denise Richards).

Well, I laughed a lot, and I think that anyone who likes black exploitation films, 70’s black cinema, and movies that poke fun at such will like Brother.  The acting is good enough, although Chris Kattan and Dave Chappelle struggle with over the top characters whose routines are too long and often wear out their welcome.  Denise Richards, an underrated actress because people focus on her stunningly good looks and super fine body, is underutilized in the film.  White She Devil’s successful quest to conquer Brother is funny, the best parody and only true satire in the film, but once her part is over, she is reduced to window dressing.  It’s a shame because the dynamic between Brother, White She Devil and the savvy Sistah Girl (Aunjanue Ellis), who is not big on the idea of a black man sleeping with a white woman, is the film’s best subplot.

My reservations aside, I want to see this movie again because what it does well it does oh-so-damn well.  The filmmakers are incredibly inspired and when they’re on in this film, I laughed as hard as I’ve ever done watching any movie.  Comedy is tricky, so I can only give kudos to this solid effort.  And, hey, I have to give props for the film’s large cast of African-Americans.


Posted by Leroy Douresseaux at 7:09 AM