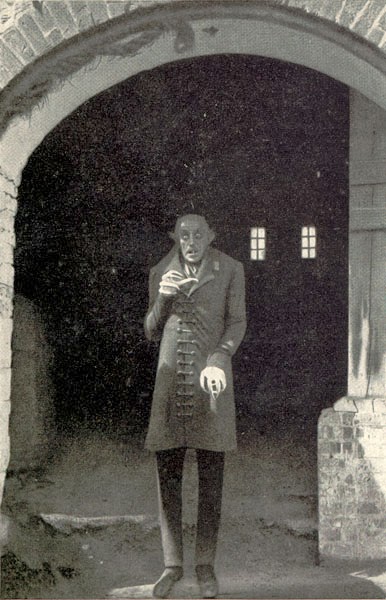 The subject of this movie review is Nosferatu, eine Symphonie des Grauens, a 1922 German Expressionist horror film directed by F.W. Murnau and starring Max Schreck.  Best known simply as Nosferatu, the film is an unauthorized adaptation of Bram Stoker’s 1897 novel, Dracula, as the filmmakers were apparently unable to obtain film rights to the book.  We are lucky that Nosferatu even still exists, as a lawsuit by the heirs to Stoker’s estate resulted in a court order to destroy all copies of the film, although one print managed to survive.

In the film Nosferatu, a young real estate agent unknowingly brokers a deal with Count Orlock who is also the vampire, “Nosferatu,” who is now pursuing the young man’s wife.  Nosferatu is one of my favorite films, but I cannot remember what version of the film I saw some nine years ago that ended up being the subject of the original version of my review, which was written shortly after I saw the film.

At the behest of his demented boss, Knock (Alexander Granach), Hutter (Gustav von Wanganheim), a young real estate agent travels to Transylvania to finalize a purchase of property by a reclusive count.  When Hutter meets the count, Graf Orlock (Max Schreck), he discovers that Orlock is the vampire Nosferatu.  Soon, Orlock is speeding on a doomed ship towards Hutters’ hometown, where Orlock plans to dine of Hutter’s virginal fiancée, Ellen (Greta Schröder).

Nosferatu is the first vampire film, and screenwriter Henrik Galen freely adapted it (without permission) from Bram Stoker’s seminal vampire novel, Dracula.  The script has nice atmosphere, but is quite thin in the last act.  A silent film with only intermittent placards of written dialogue, Nosferatu has a dreamlike quality, and that isn’t just because of the lack of sound, except for orchestrated music (played in theatres by live orchestras back in the days before sound film recordings), but because of the way the director and photographers composed the film.

The cinematography of Günther Krampf and Fritz Arno Wagner is a continuous spool of war between light and shadow.  Shadowy textures flicker over the sparse and sumptuous decorations, sets, and costumes, all designed by Albin Grau.  Murnau presents Nosferatu as a faerie creature hopping, dancing, and racing across the landscape and through time like a thing not really there, a personification of death both ethereal and real.

I will lavish the most praise upon Max Schreck for his awesome performance as the title character.  His Nosferatu is a stiff, yet pliable thing, a relentless creature, nimble for all that he may seem rigid.  It’s is truly the personification of a corpse as a deadly walking thing.


Posted by Leroy Douresseaux at 10:05 AM