Review: "The Purge" is Thrilling and Accusing 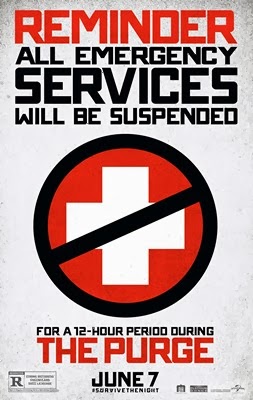 The Purge is a 2013 science fiction film and crime-thriller from writer-director James DeMonaco.  Set in the near-future, The Purge focuses on a wealthy family whose home is under siege on a night when violent crimes like murder and rape are legal and sanctioned by the American government.

The Purge is set in the United States of America in the year 2022.  Unemployment is at one percent.  Crime is at an all-time low, and violence barely exists.  How did this come to pass?  There is an event called “The Annual Purge,” when practically all criminal activity is legal.  Over a 12-hour period, Americans can rob, assault, rape, and murder each other and they will not face legal consequences.  This event, started by what the film calls America’s “New Founding Fathers,” allows Americans to purge or vent negative emotions and repressed/violent urges.

The Purge opens on March 21, 2022.  At 7 p.m. (Eastern, I presume), the Purge begins.  James Sandin (Ethan Hawke) is a wealthy home security salesman who lives in an exclusive suburb of San Francisco, California.  After adding new security features to his house, James believes that he and his family:  wife, Mary (Lena Headey); daughter, Zoey (Adelaide Kane); and son, Charlie (Max Burkholder), can sit out this year’s edition of the Purge in the safety of their heavily fortified home.  However, a complication arises, and the Sandins end up receiving uninvited guests, and some want to kill them.

Several years ago, I happened to be watching CNN during one of those sadly rare moments when a guest says something thoughtful or thought-provoking about which we should all spend time considering.  That someone (“conservative film critic,” Michael Medved, I believe) talked about how he went from being a supporter of Robert F. Kennedy to becoming a political and social conservative.  These are not his exact words, but he basically said that sometimes we (the country as a whole) has to go to war.

My question to that statement and others like it is, “But who goes to war; who is going to do the fighting?”  Over the years, I’ve run into many people who consider or call themselves Republican, conservative, libertarian, etc., who are always demanding U.S. military action/intervention, yet they themselves never volunteer for the armed services so that they can do the fighting they so vociferously demand.  During last year’s U.S. Presidential campaign, a photograph of historical footnote Mitt Romney emerged which showed a young Mitt marching in favor of the Vietnam War.  He was even carrying a sign with a pro-war slogan.  This should have been embarrassing to Romney as he had successfully used a religious exemption as a Mormon to avoid military service.  I feel safe in assuming that Mitt was not embarrassed by the revelation of the photo.

The Purge, one of the most politically astute and socially relevant science fiction films to come around in years, delves into these notions and ideals of what it means to sacrifice for one’s country and also who or what is the sacrifice.  Writer-director James DeMonaco directly and bluntly asks why the people who benefit the most from what America offers feel that they should sacrifice the least for that same country.  Why are some people expendable merely because the elites believe that they have no value?  If sacrifice is so noble and valuable, then, would a destitute nobody really be a worthy sacrifice?


Posted by Leroy Douresseaux at 11:36 AM