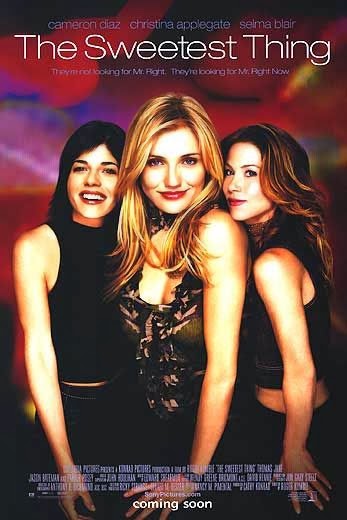 The subject of this movie review is The Sweetest Thing, a 2002 romantic comedy and chick flick.  The film stars Cameron Diaz as a woman forced to pursue Mr. Right, after missing an opportunity the first time she meets him.  I have to say that this is one those movie that I enjoyed watching so much that it made me “feel good,” so it is a true feel good movie.

Some of her critics and embittered fellow professionals have accused Cameron Diaz of getting by on her looks.  She is a very talented actress, but I’d be lying if denied that one of the reasons I like to watch her movies because of her dazzling beauty and super fine ass.

She unleashes her talent and gorgeous body in director Roger Kumble (Cruel Intentions) and writer Nancy Pimental’s The Sweetest Thing.  Mistakenly sold has a romantic comedy, it is actually raunchy comedic romp through a fantastic vision of the millennial dating scene.  The Sweetest Thing is more in the vein of There’s Something About Mary than say Autumn in New York, and it’s easily one of the funniest movies I’ve seen since Mary.  Some of the credit has to go to Kumble’s sense of timing, important for someone who directs comedy, especially something as farcical as this, and especially Ms. Pimental, who was a series writer for television’s “South Park,” of which The Sweetest Thing shares a sense of over-the-top, gross out comedy.

Cameron Diaz plays the lead character, Christina Walker, simultaneously with bold confidence and sexual power juxtaposed with a painful lack of confidence and romantic confusion.  By doing this, Ms. Diaz makes Walker human; without that she’d merely be a raunchy boob worthy of a few belly laughs.  She can pull it off because she’s so beautiful and likeable.  The cold truth of the matter is that, while art depicts any number of topics, ideas, and subjects, it often executes that depiction in an idealized form.  Artist paint good looking people; even the ugly subjects are stylized ugly.  Pretty people look good on the big screen, and, frankly, many of us would simply think of Christina Walker as a trailer trash ‘ho if she wasn’t played by someone as attractive as Ms. Diaz.  Her looks make us give a pass to some of the unsavory aspects of Christina’s character.

Sadly, the script doesn’t do justice to Christina’s sidekicks:  divorce lawyer Courtney Rockcliffe (Christina Applegate) and the recently dumped Jane Burns (Selma Blair, Legally Blonde).  Courtney starts off with such promise.  She’s a funny partner in crime, but, by the end of the film, she’s reduced to being in scenes merely to feel sorry for her friend.  The breakup of Jane’s romance is the element that begins the film’s story.  Ms. Pimental ignores Jane’s plight and turns her into pincushion for crude sex scenes – hilarious, but still crude.

Reservations aside, The Sweetest Thing is just too funny not to see.  It would take a lot of laughs to make me ignore the fact that the filmmakers throw the story and characterization out the window in favor of raw humor, and, by Jove, the movie has that many laughs and more.

Posted by Leroy Douresseaux at 7:34 AM