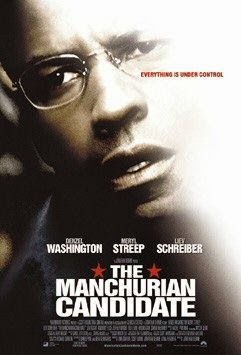 DRAMA/THRILLER with elements of mystery and science fiction

The subject of this movie review is The Manchurian Candidate, a 2004 thriller and drama film from director Jonathan Demme.  The film is an adaptation of the 1959 novel, The Manchurian Candidate, from author Richard Condon.  It is also a re-imagining of director John Frankenheimer’s 1962 film adaptation of the book.  In the 2004 film, a war veteran begins to believe that during the Gulf War, soldiers in his U.S. Army unit were kidnapped and brainwashed for sinister purposes.

If you’re going to remake a great movie, you should try to make the new movie also be a great film, or at the very least try to make it a…very good film.  The Manchurian Candidate, Jonathan Demme's (The Silence of the Lambs) update of the Frank Sinatra classic of the same title, which was directed by John Frankenheimer, is neither great nor very good.  It’s the worst thing one could get from the esteemed filmmakers involved in the project, all of whom have glowing resumes.  The new The Manchurian Candidate is a flat out average film that’s barely worth an exciting trip to the video store.

In the original 1962 film, the Manchurian Candidate was a sleeper agent/assassin trained by the Red Chinese.  In the new film, the sleeper agent is Raymond Prentiss Shaw (Liev Schreiber).  Raymond Shaw is the subject of a mind control project by Manchurian Global, a huge conglomerate with its hands in everything from providing services to the military to funding political campaigns and owning politicians.  With the help of their political cronies and Raymond’s mother, Senator Eleanor Prentiss Shaw (Meryl Streep), Raymond, a young Congressman from New York, is made the Vice-Presidential nominee on the opposition (likely the Democrats, but not directly named) party’s ticket in the upcoming presidential race.

Raymond had once been Sergeant Raymond Shaw back in 1991 during Operation Desert Shield just before it became Operation Desert Storm.  He answered to U.S. Army Major Bennett Marco (Denzel Washington).  Washington, Shaw, and the rest of their platoon were ambushed in Iraq, but all they remember about the incident is that Shaw single-handedly saved the lives of the entire platoon (except for two men who were killed during the attack) after Major Marco had been knocked unconscious.

However, Ben Marco runs into another platoon buddy, Corporal Al Melvin (Jeffrey Wright), after a Boy Scout assembly where Marco recounts Shaw’s heroism.  Melvin is disheveled, and he tells Marco a fantastic tale of strange dreams he’s been having about their platoon being kidnapped and experimented on after they were ambushed.  Melvin’s story contradicts the official version of what happened in Kuwait, the one that made Shaw a Congressional Medal of Honor recipient.  Although, Marco is uncomfortable with Melvin’s tale, he knows there is a ring of truth to it because he also has never been comfortable with the official version of the ambush and their rescue.  He thinks someone was inside his head after his platoon was ambushed, and he wonders if the same thing happened to Shaw.  Marco must find out, and he’s running out because the nation just may be voting for a man whose mind is controlled by sinister forces.

It’s supposedly not always fair to compare the new version of something to the old, but it happens anyway.  Nearly everything that made the classic black and white The Manchurian Candidate an unusually creepy and unique suspense thriller is present in the 2004 version, but the filmmakers have taken the characters, plot, and settings (Korea becomes the Persian Gulf in the new film) and made a flat thriller, in which the thrills only occasionally register.  The surprises are mild, and while the changes made for the new film seem like novel ideas, the filmmakers don’t get much heat from them.

I blame everybody.  Denzel Washington’s performance is either phoned in or overwrought, but it’s his worst in a long time.  Meryl Streep tries to get traction from her evil character, but it’s a performance wasted on an all-too-phony character; besides, Ms. Streep just can’t replace Angela Landsbury’s mega evil mom from the original.  I place the most blame on director Jonathan Demme.  Back in the 1980’s, his novel spin on pedestrian film stories and his quirky characters were stunningly refreshing.  He hit the big time with the hugely entertaining and very well done The Silence of the Lambs, but since then, he has become a big time Hollywood player making mediocre films.  He continues that trend with The Manchurian Candidate.

Early Internet rumor mongering about The Manchurian Candidate described this film as a hot political potato that took sharp swipes at President Hand Puppet and his administration, swipes that would draw blood like Michael Moore’s Fahrenheit 9/11 did, but no such luck.  You wouldn’t miss much if you waited for this to appear on TV – basic cable TV.

NOTE:
2005 Golden Globes, USA:  1 nomination: “Best Performance by an Actress in a Supporting Role in a Motion Picture” (Meryl Streep)


Posted by Leroy Douresseaux at 7:25 AM