Review: "The Croods" Like a Full-Length Looney Tunes Movie 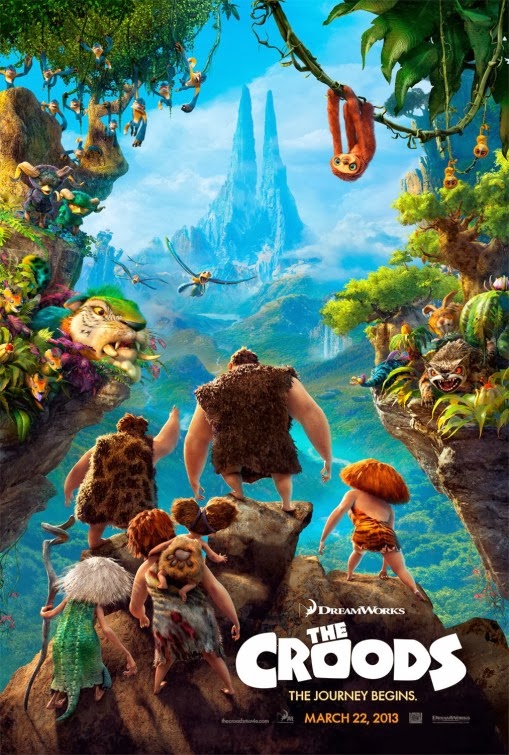 ANIMATION/FANTASY/ADVENTURE/COMEDY with elements of action and drama

The Croods is a 2013 computer-animated adventure and comedy film that was theatrically presented in 3D.  It was produced by DreamWorks Animation and distributed by 20th Century Fox.  The Croods focuses on a caveman family trekking through an unfamiliar, fantastical world with the help of an inventive boy.

Grug wants his family to stay in the cave at all times, except when they hunt for food, which is getting harder to find.  Grug is also against his family trying new things or making discoveries; “new things” are a threat to survival, he declares.  This causes problems between Grug and his rebellious teen daughter, Eep, whose curious nature clashes with her conservative father.  Then, Eep meets Guy (Ryan Reynolds), a nomadic cave boy, who is both clever and inventive.  Eep is immediately attracted to the boy.  Grug hates Guy, but after their cave is destroyed, The Croods find they need Guy, as they travel through an exotic land in search of a new home.

Since the original Madagascar (2005) and Kung Fu Panda (2008), DreamWorks Animation has improved on the technology of computer animation in terms of motion (characters and objects), depiction and creation of environments, picture definition, texture, and range of color.  The Croods proves that this animation production company is determined to keep pushing the envelope.

As for the story and characters, The Croods is best when it’s being fast and funny.  I have found that some of DreamWorks Animation’s films (and even television episodes) have the zest and style of Warner Bros. Looney Tunes animated shorts.  In a way, much of The Croods is an extended series of gags that recall Bugs Bunny, Daffy Duck, and Road Runner cartoons.

Pretty much every member of The Croods’ cast seems to be a looney toon, except for the mother, Ugga.  For some reason Ugga is practically non-existent; she is like a voice of wisdom, reason, and caution that is repressed and only heard when the film needs to squeeze in a poignant moment between chuckles and yucks.  And then, Ugga’s voice seems barely able to be heard above the fray of manic comedy.  In fact, Catherine Keener, who gives voice to Ugga, is unable to distinguish herself from the standard female voice.  I actually thought that Maya Rudolph was Ugga’s voice.  That is shocking when one considers how distinctive a performer Keener is.

But I guess it comes down to this.  DreamWorks Animation has mastered the technology of computer animation.  They have refined a brand of comedy that ranges from broad to slapstick and from satire to parody.  They embrace the crazy concepts they turn into films that are often inventive concerts of explosive visuals.  Still, DreamWorks Animation’s films lack the emotional resonance frequently found in movies from Pixar (except for Cars 2, which is straight crap).

The Croods can be viewed as a love triangle involving Grug, Eep, and Guy – mostly with Eep in love with Guy and with Grug hating Guy, mainly for that reason.  The performances by the three actors playing these characters are good, but the script really does not delve into this conflict.  It is easier to be surface and let comic moments rather than dramatic moments sell this three-way conflict.

That said, going by what is on the screen, The Croods is an exceptional movie, although stronger drama could have made it a truly great film.  I love the physicality the filmmakers give the characters.  Their wildness and animal-like tendencies (especially the way they move) make them attractive; the way they move, their facial ticks and expressions, and their reactions may it hard to ignore them.  The animation has a sense of depth that makes even its fantastic backdrops seem real – such as the cave and surrounding landscape where the Croods live at the beginning of the film.  I can use this old standby:  The Croods is a visual feast.  It falls short of greatness and perfection, but there is nothing like it, and it is quite good, indeed.


Posted by Leroy Douresseaux at 8:49 AM