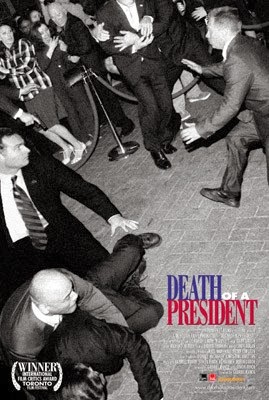 In his mock documentary (also known as a “mockumentary”), Death of a President, director Gabriel Range presents a scenario in which U.S. President George W. Bush is assassinated in October of 2007.  Death of the President pretends to be an investigative documentary that examines the key players and events surrounding the killing of President Bush, several years after the as-yet-unsolved murder occurred.

Death of a President follows the events leading up to the assassination and its aftermath, and the film also features a bevy of talking heads, which includes the people around the president, murder suspects, and their families.  In his hypothetical film, Range focuses on the fallout that follows Bush’s murder – specifically the media’s reaction, the rush to convict a Muslim as the assassin, and the machinations of newly installed President Cheney to grab more presidential powers.

Since its appearance at the 2006 Toronto International Film Festival, Death of a President has been highly controversial, and the producers had a difficult time finding a company to distribute the film to U.S. theatres.  Ultimately, Newmarket Films, which handled Mel Gibson’s The Passion of the Christ, distributed the film in the U.S.

I like this movie, although I did find the scenes in which President Bush was shot and the ones occurring at the hospital where he later died to be in poor taste.  Like him or not, he is (as of this writing) a sitting U.S. President, and to portray his death in so brutal and perhaps cavalier fashion is to traffic in mean-spiritedness and carelessness.

On the other hand, what takes place before the assassination and after is riveting stuff.  In the scenes leading up to the shooting, director Gabriel Range creates a riveting thriller that quietly races to its damnable turning point.  After Bush’s death, Range and his co-writer Simon Finch display a knowledge of the American mass media, of law enforcement (in particularly the FBI) and how they work and react to big events that is surprising considering they are not Americans.  Their spin on how Vice-President Dick Cheney would react if he became President after an assassination is dead-on (and maybe a little obvious considering Cheney’s actions as Vice-President).  Who doesn’t think Cheney would move to consolidate more power for himself with a Congress and a country reeling from shock, reluctant to challenge him, and desperate for leadership in such a time of crisis.

Range apparently specializes in these kinds of dramatizations of probable future events, such as his TV film, The Day Britain Stopped (which I’ve never seen).  He’s so-so at presenting interviews with the fictional talking heads involved in the events of Death of a President.  Some of the interviewees don’t come across as authentic, so the film sometimes feels phony.  Still, Range has created an engaging, unforgettable “what if,” and he smartly realizes what is most frightening about a U.S. president being assassinated.  Such an event could very well mean the definite beginning of the certain end of this grand experiment called the United States of America.


Posted by Leroy Douresseaux at 7:27 AM