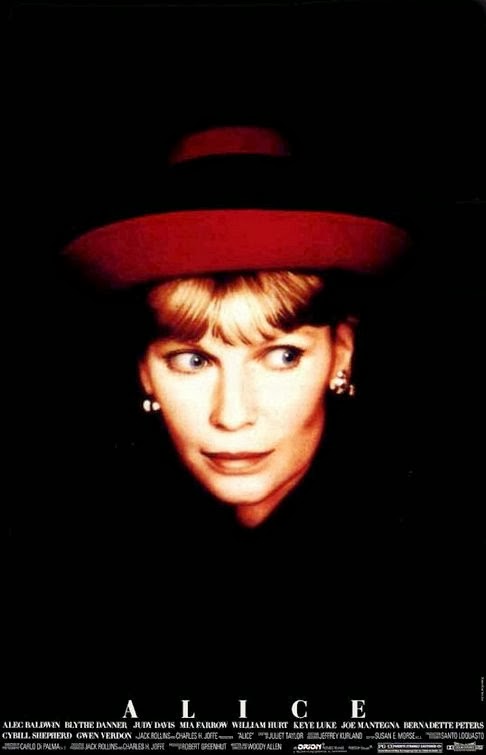 COMEDY/FANTASY with elements of drama and romance

The subject of this movie review is Alice, a 1990 comedy with fantastic elements from writer-director, Woody Allen.  The film tells the story of a spoiled Manhattan housewife who re-evaluates her life after visiting a healer in Chinatown.

Alice Tate (Mia Farrow) is rich and pampered New York housewife; married 16 years to Doug Tate (William Hurt) and bored, she dreams of having an affair with Joe (Joe Mantegna), a saxophone player she meets at her children’s nursery school and to whom she is surprisingly attracted.  Besides an unhappy marriage, various physical ailments beset Alice, including a bad back.

A friend suggests she visit Chinatown and see Dr. Yang (the late Keye Luke), an acupuncturist well known among her social set.  Dr. Yang quickly realizes that Alice’s back isn’t really bad, but that she’s just unhappy, so he recommends a number of mysterious herbal potions.  The magical concoctions alternately loosen her inhibitions, turn her invisible, and allows her to see and share tender moments with long, lost love ones, including a deceased lover named Ed (Alec Baldwin).  But will all this help Alice turn her superficial life into something more meaningful?

Woody Allen’s 1990 film Alice is a small and charming lost gem.  It was his final film distributed by Orion Pictures, the studio that had released most of his output of the 1980’s.  Orion filed bankruptcy, and another studio ended up releasing the last film he’d actually shot as part of his deal with Orion, Shadows and Fog.  Alice is occasionally a madcap comic fantasy adventure full of fun and mystery, and sometimes it is a whimsical fantasy that walks a thin line between broad comedy and poignant drama.

Although the film has some good performances, in particular the late Keye Luke as the movie’s philosophical center, Dr. Yang, Alice is about… well, Alice.  The narrative meanders when Alice meanders about the state of affairs in her life.  When she is overly emotional, the film becomes shrill.  When she’s happy, the film radiates vibrantly like the lush colors of the autumnal New York City in which she lives.  When Alice is sad, the film is dark and distressing, so the viewer can really share her discomfort.  Ms. Farrow’s gives a good performance, which epitomizes why Mia Farrow worked so well as a female stand in for Woody Allen in his films.

Alice will please fans of Woody Allen’s films, but people not familiar with his style will find their patience short with it.  The simply, beautiful cinematography that turns NYC in the fall season into a series of impressionist paintings.  The gorgeous Manhattan apartments, restaurants, and handsome outdoor locales are glorious eye candy for anyone who loves to look at pretty movies.  Sometimes, Alice drags, but the dialogue is smart and snarky dialogue.  There are sparkling musical numbers (Allen often chooses early to mid-century big band, jazz, and swing as the soundtrack to his movies).  The cast is all too happy to bury themselves into the character rolls for which Allen has chosen them – all the usual Woody fare.  Still, Alice is bit too much about Alice, and except for Keye Luke’s Dr. Yang, the rest of the cast is full of underutilized characters.  That’s a shame, and that leaves Alice short of being on the list Woody’s best work.

1991 Golden Globes:  1 nomination for “Best Performance by an Actress in a Motion Picture – Comedy/Musical (Mia Farrow)


Posted by Leroy Douresseaux at 7:17 AM