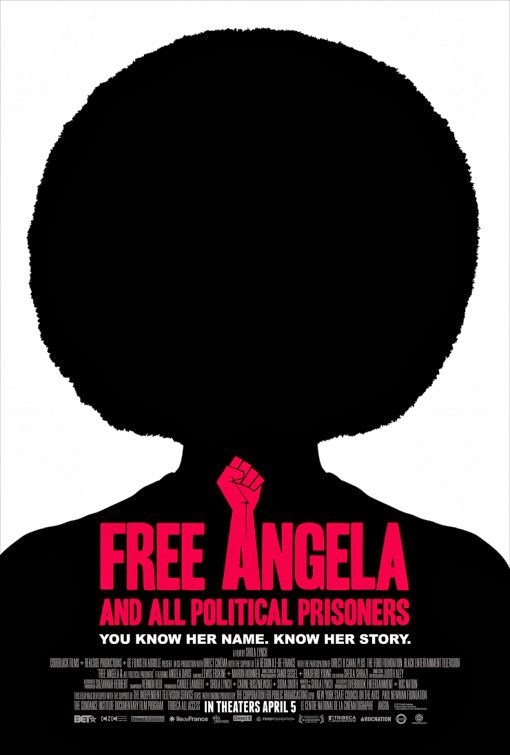 Free Angela and All Political Prisoners is a 2012 documentary film from writer-director Shola Lynch.  The film focuses on a young college professor named Angela Davis and how her social activism led to her being implicated in a botched kidnapping and being placed on the FBI’s 10 most wanted list.

The film opened at the 2012 Toronto International Film Festival, and made its theatrical debut in the United States in April 2013.  Free Angela and All Political Prisoners gained some notice because director Shola Lynch received financial backing to make the movie from actress Jada Pinkett Smith, who later brought in her husband, actor Will Smith, and recording artist and businessman, Jay-Z, as additional backers.  Oscar-winning filmmaker, Paul Haggis, was also a supporter of the film.

Born January 26, 1944, Angela Yvonne Davis, best known as simply “Angela Davis,” is an American political activist, scholar, and author.  During the 1960s, Davis returned to the United States after spending time in Germany.  She became a nationally known activist and radical; she was also a leader in the Communist Party USA.  It was her close relations with the Black Panther Party (although she was never an official member of the party) and her work for prisoner rights that brought her to prominence and earned her notoriety in establishment circles.

On August 7, 1970, at the Marin County court house, a botched kidnapping attempt ended with a shootout that left four people, including a judge, dead.  Davis was a close associate of one of the dead kidnappers, so the state of California brought conspiracy, kidnapping, and murder charges against her – all of which were punishable by the death penalty.  Davis became a fugitive and, at the time, the third woman to have her name appear on the FBI’s Ten Most Wanted Fugitive List.

Free Angela and All Political Prisoners gives an account of the kidnapping, Davis’ flight from arrest, the FBI manhunt for her, her arrest and imprisonment, and the subsequent trial.  The film also chronicles Angela Davis’ life as a youth, a young scholar, and as a controversial young college professor at the University of California, Los Angeles (UCLA).

The pivotal events of Free Angela and All Political Prisoners begin with events that took place in 1969, when Davis was hired by UCLA.  Her time as a professor is not the film’s central narrative, although this is not to say that the film is dry and boring for a time.  However, this documentary does not really come to life, in a way that reflects the fiery young radical that Angela Davis was, until it starts to recount the various events related to Davis that occurred in 1972.

In early 1972, Caruthers, California dairy farmer, Rodger McAfee (or Roger McAfee), with the help of a wealthy businessman, paid just over $100,000 in bail money to get Davis released from the county jail, while she awaited trial for the Marin County courthouse incident.  For me, this is when Free Angela and All Political Prisoners becomes energized as a narrative.

The elements of which director Shola Lynch makes best use in her film are the interviews, both new and archival.  As by chance or by destiny, the subjects of the new interviews are either good storytellers or are exceptionally good at conveying information.  I could listen to many of these interviewees for hours.

Archival interviews and news footage are also illuminating.  Then California governor (and future President), Ronald Reagan, does not come out looking like a good guy in this film.  He comes across as a pro-segregation-pro apartheid type who believes that Black people are second class citizens who don’t have full citizenship, and that outspoken people of color deserve imprisonment or even death.  As for President Richard Nixon, the side of him that is an authoritarian, paranoid psycho is fully in evidence.

Simply because of the story it tells and the incidents it recounts, Free Angela and All Political Prisoners should be treated like an important book – available in every public library in the United States.  All African-American parents should make sure that their children see this film.  Even conservative Black people whose Uncle Tom tendencies might make them act as if what happened to Angela Davis never happens to black people should show this film to their children.


Posted by Leroy Douresseaux at 7:17 AM