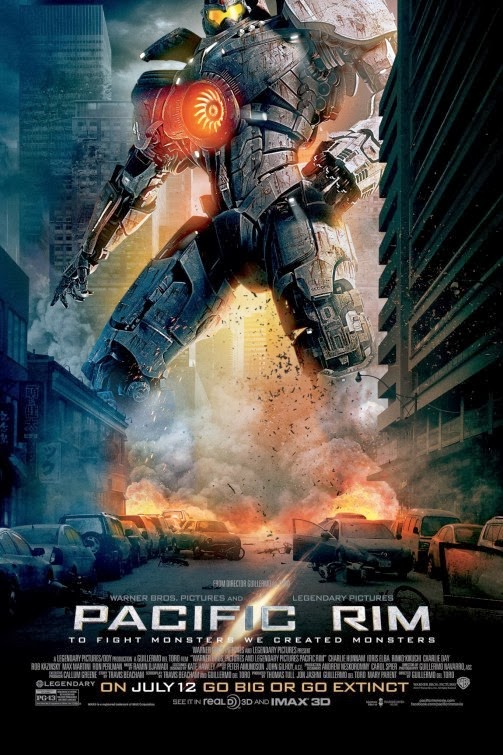 Pacific Rim is a 2013 science fiction-action film from director Guillermo del Toro (Pan’s Labyrinth).  The film is set in a near-future where humankind fights monstrous creatures that emerge from the sea with gigantic humanoid war machines.  A former pilot and a trainee are paired up to drive one of these war machines as part of a desperate plan to save the world from an apocalypse.

Pacific Rim is set in a world in which, beginning in 2013, colossal monstrous beasts, called “Kaijus,” emerged from “the Breach” a chasm on the floor of the Pacific Ocean that opens to an inter-dimensional portal.  These Kaijus began attacking human cities, especially along the Pacific Rim.  To combat them, the Pacific Rim nations built equally colossal, robotic, humanoid war machines called “Jaegers” (think Transformers in human-like mode).  The Jaeger program is initially successful, but many are destroyed as the Kaijus grow more powerful and the frequency of their attacks increased.

By 2025, the United Nations and world governments have discontinued the Jaeger program.  However, Jaeger program commander, Stacker Pentecost (Idris Elba), has taken the four remaining Jaegers that he has, and has devised a last-ditch plan to end the war against the Kaijus by planting a thermonuclear bomb in their portal, the Breach.  Pentecost recruits former Jaeger pilot, Raleigh Becket (Charlie Hunnam), to pilot a revamped version of his old Jaeger, Gypsy Danger.  But resistance from some of his fellow pilots and his friendship with Mako Mori (Rinko Kikuchi), a Jaeger pilot wannabe, may complicate an already complicated mission.

First, I must say that I think that “Pacific Rim” is a bad title.  I don’t know what else they could have titled this movie, but that title is vague in regards to the larger story of the movie.  Anyway, I think of Pacific Rim as the ultimate fanboy movie.  If you like big science fiction and fantasy films with big special effects and that are almost entirely created by CGI (computer-generated imagery), Pacific Rim might be for you.  If you like giant robots (also called “mecha”) fighting giant monsters in what looks like a cross between mixed-martial arts and WWE-styled professional wrestling, this movie is for you.  If you like seeing disaster and destruction on an epic scale, with cities literally smashed to bits, Pacific Rim is for you.

I like Pacific Rim, but it is a little too long.  The movie runs for 131 minutes; I’d had enough after 100 minutes.  Although I am a fan of some of the cast, I also wish that the cast had more charisma.  Idris Elba is always a great film presence, as he is here.  Ron Perlman adds flair and something like an exotic spice to every movie in which he appears, and he does so in this film as Hannibal Chau.  I love seeing Charlie Day (as Dr. Newton Geiszler) because of his deft comic touch.  However, at least to me, the rest of the cast lacks the personality and charisma to carry a big genre movie like Pacific Rim.  I don’t know what people see in Charlie Hunnam.  He might be good for TV, where he stars in the cable television series, “Sons of Anarchy,” but his presence is undersized for the massive Pacific Rim.

I can overcome my reservations because I’m happy to have a Guillermo del Toro movie, the first in five years.  Pacific Rim proves that he can do big effects-laden movies, although this film lacks the level of imagination in del Toro’s previous efforts.  It is precisely his imagination, however, that makes a weird, monster movie concept like Pacific Rim work.  So the fanboy in me does like this movie, especially because of its director, which is a very fanboy thing.


Posted by Leroy Douresseaux at 7:48 AM