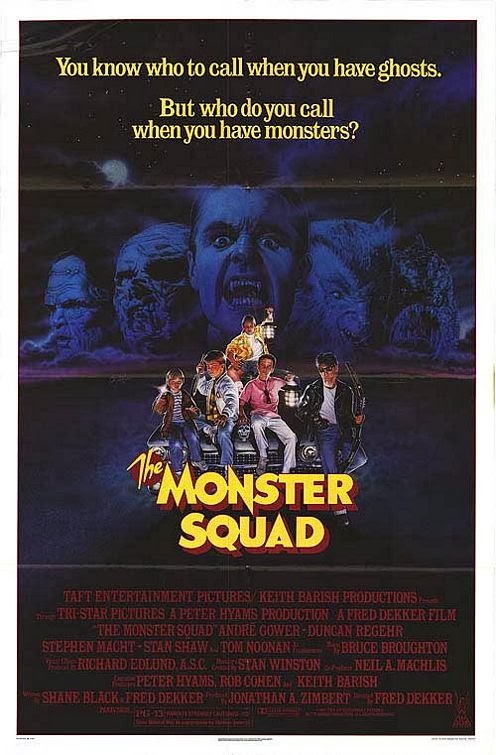 The subject of this review is The Monster Squad, a 1987 comic horror film directed by Fred Dekker and written by Shane Black and Dekker.  In the movie, re-imagined versions of classic movie monsters invade a small town in a bid to control the world, but they face a bad of savvy kids determined to stop them.

The 1987 cult-favorite flick, the comic horror film, The Monster Squad, has recently found new life 20 years after being largely overlooked upon its initial theatrical release.  While it remains basically a horror flick for children (appropriate even in these politically correct times), the film is, at time, genuinely scary.  The villains of The Monster Squad are also an homage to the monsters of classic Universal Studios black and white monster movies.

Dracula, the Wolfman, Frankenstein, the Mummy, and Gill Man descend upon a small town in search of a diabolically powerful amulet that could give Dracula (Duncan Regehr) dominion over the world.  The only thing that could stop the amulet’s power is an incantation in a diary belonging to Dracula’s arch-nemesis, Van Helsing (Jack Gwillim).   However, the book has fallen into the hands of 12-year-old Sean Crenshaw (Andre Gower).

Sean and the rest of his young friends idolize classic monster movies, and call themselves The Monster Squad.  With the help of his gang of monster-obsessed misfits, Sean tries to stop Dracula’s nefarious plans.  Can the Monster Squad:  Sean, Patrick (Robby Kiger), Fat Kid/Horace (Brent Chalem), Rudy (Ryan Lambert), Eugene (Michael Faustino), and Sean’s little sister, Phoebe (Ashley Bank), save the day?  With Sean’s dad, policeman Del Crenshaw (Stephen Macht) and Scary German Guy (Michael Cimino) helping, they just might, and it’s worth watching this movie to find out.

Co-writers Shane Black and Fred Dekker, who also directs this film, seem to take the view that one can place children (in this case pre-teens and early teens) in a horror scenario – one as scary as the horror movies they might watch.  Although a juvenile cast means that Black and Dekker wouldn’t make a bloody, slasher film, to make a horror flick, they would still have to present their youthful characters in situations in which they face actual peril or severe bodily harm or even death.  After all, a scary movie for kids is still a scary movie.

The Monster Squad isn’t even a great horror film, or even a very good movie.  For one thing, the narrative occasionally takes great leaps, leaving out crucial scenes.  Perhaps, the producers forced cuts to reduce the film’s runtime, and the loss of scenes occasionally caused lapses in logic within the narrative.  Still, while it may not be a great movie, it’s a memorable B-movie.  The Monster Squad is just fun to watch, warts and all.


Posted by Leroy Douresseaux at 8:19 AM