"Pokemon: Genesect" Arrives on DVD and Manga on December 3 2013 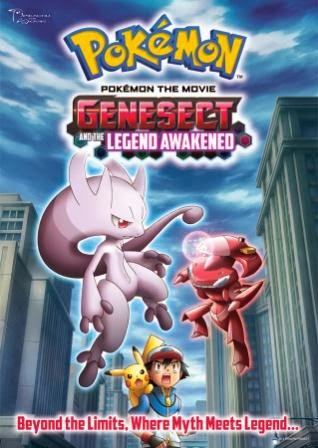 VIZ MEDIA ANNOUNCES THE RELEASE OF POKéMON THE MOVIE: GENESECT AND THE LEGEND AWAKENED DVD AND MANGA EDITIONS

VIZ Media, LLC (VIZ Media), the largest distributor and licensor of anime and manga in North America, gives POKÉMON fans something brand new in time for the holidays as it announces the release of the DVD and manga editions of POKÉMOn THE MOVIE: GENESECT AND THE LEGEND AWAKENED on December 3rd.

When big trouble threatens the big city, it’s up to Ash, Pikachu, and their friends to stop it! A vast Pokémon habitat amid the hustle and bustle of the big city seems like the perfect new home for a group of five Genesect. The arrival of these Mythical Pokémon quickly becomes a problem, though: their nest threatens the city’s power supply, and they keep attacking anyone who approaches it. On top of that, they’ve attracted the attention of the legendary Pokémon Mewtwo, who sympathizes with them because its own origins also involve human tampering. Their leader, a red Genesect, doesn’t trust Mewtwo, and their confrontation quickly rages out of control! Can Ash and friends stop these two powerful Pokémon before they destroy the city?

“When a group of mythical and powerful Genesect Pokémon suddenly reappear in the world and threatens the city, it will be up to Ash and Pikachu to save the day!” says Charlene Ingram, Senior Manager, Animation Marketing. “GENESECT AND THE LEGEND AWAKENED is the latest film in the legendary POKÉMON movie storyline, and fans will want to be sure to join the fun with Ash, Pikachu and other favorite characters in these fun new DVD and manga editions that will be available to fans in time for the holidays!”

POKÉMON is one of the most successful entertainment franchises of all time with over 241 million video games sold worldwide in addition to extraordinary publishing and merchandise sales. The next generation of Pokémon video games, Pokémon X and Pokémon Y, launched worldwide in October exclusively for the Nintendo 3DS system. VIZ Media distributes a wide array of POKÉMON animated titles and also is the exclusive North American publisher of POKÉMON manga.

Posted by Leroy Douresseaux at 6:33 AM