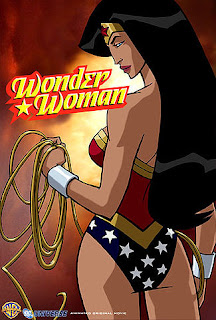 Wonder Woman is a 2009 direct-to-video superhero animated film from Warner Bros. Animation. Starring DC Comics character, Wonder Woman, this is also the fourth feature in the DC Universe Animated Original Movies line. The movie pits the most famous comic book super-heroine, Wonder Woman, against Ares, and is loosely based upon the stories by acclaimed comic book writer/artist, George Perez.

Wonder Woman begins during an epic battle between the proud and fierce race of warrior women, the Amazons, and the forces of Ares (Alfred Molina), the Greek god of war. After Amazon Queen Hippolyta (Virginia Madsen) defeats Ares, the gods force a peace. The Amazons are granted an island, Themyscira, where they can be eternally youthful and isolated from men, but Ares will also be imprisoned on the island.

Over a 1000 years later, United States Air Force pilot, Colonel Steve Trevor (Nathan Fillion) crashes on Themyscira. Modern man’s trespass of the island also leads to events that enable the imprisoned Ares to escape with the help of an Amazon who betrays her sisters. Princess Diana (Keri Russell), daughter of Hippolyta, wins the right to return Trevor to his world and to also recapture Ares. However, Ares plans to not only regain his former powers, but also to bring total war to Earth. Will Princess Diana triumph and become Wonder Woman?

First, I must say that I am surprised at the amount of violence in Wonder Woman, and I’m not just talking about standard science fiction and fantasy violence. Although it is not explicitly depicted, murder and killing are prominent in the film from beginning to end. That doesn’t offend me, but does surprise me, and I thought that I should mention it.

Anyway, this is a terrific movie, and although I have many films to go in the series, I think this is the best of the DC Universe Animated Original Movies I’ve seen. The animation is good, but even better is the action. Wonder Woman’s action set pieces are like having the Lord of the Rings films and the 2007 hit, 300, turned into animation for our viewing pleasure, and it’s pleasurable, indeed. The writing is solid, especially the character development, which emphasizes the relationship between Diana and Steve and also allows both characters to go on a journey of growth.