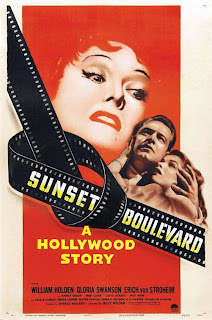 The subject of this movie review is Sunset Boulevard, the 1950 Film-Noir from director Billy Wilder. The film follows an unsuccessful screenwriter drawn into the fantasy world of a faded silent movie star who dreams of a big screen comeback. Sunset Boulevard, named for the boulevard that runs through Los Angeles and Beverly Hills, California, is widely accepted as one of the greatest films of American cinema.

Joe Gillis (William Holden) was a struggling, journeyman screenwriter in late 1940’s Hollywood. Recently deceased, he begins to narrate the final months of his life. He only has a few films to his credit – B-movies, and he’s a few months behind on both his rent and car payment; in fact, two repo men are tracking him to take his car. Chance takes him into the driveway of a humongous old mansion (an actual mansion once owned by Jean Paul Getty) built at the height of the silent film era.

There, he meets the owner, faded silent film star, Norma Desmond (Gloria Swanson). After a bit of a rocky start to their relationship, Norma hires Joe to help edit a long script she has penned for what she firmly believes will be her comeback film, a movie directed by her old collaborator, director Cecil B. DeMille (playing himself). As the work progresses, however, Norma draws ever so closer to Joe and becomes more dependent on him for support during this trying (for her) time, but her neediness and passionate obsession engulfs him in its fiery throes.

Sunset Blvd. or Sunset Boulevard is famed writer/director Billy Wilder’s ode to the decadence of old, old, Hollywood – the silent film era, and it is am unblinking look at the people on the periphery of Hollywood filmmaking – journeyman (or hack) writers, assistant directors, script readers, and other second and third string behind-the-camera people and studio foot soldiers. Not many individual elements of this film can be called great, with the exception of Holden’s narration, his screen performance, and the film’s art direction and set decoration. The screenplay also daringly tackled the less glamorous side of filmmaking from various angles, and that was groundbreaking.

The magic in Sunset Blvd. is how everything comes together. William Holden’s narration combined with John Seitz’s sultry black and white photography create a film-noir edge that is riveting and engages the audience like a championship wrestler. Billy Wilder’s patient direction seems to slowly gather up all the ingredients, allowing them to blend into a haunting tale of obsession and the ravenous hunger to regain what was lost.

Gloria Swanson’s performance strikes the right note, for the most part, but the performance often seems like it’s too much, annoying even. The truth of the matter is that Ms. Swanson is all surface, and she never gets to the bottom or to the meat of the character; there is no real history or reason why behind her. Gloria Swanson becomes more hysterical as the film advances toward the conclusion; Norman Desmond becomes more pathetic than sympathetic, and that hurts the storytelling. As good as the film is and as good as things come together progressively, about three-quarters of the last hour are redundant.

William Holden’s Joe Gillis, on the other hand, is a great character. Holden creates a man who has no pretensions and has accepted the idea that he’s a hack. He can deal with being a failure without falling apart or feeling like a failure. He’s an extraordinary ordinary Joe. While it’s true that Gillis and Desmond know they need each other, but are either too caught up in himself (or herself) or are blind except for his or her own need, Gillis is a reasonable voice to tell this peculiar story. There is something that keeps me coming back to this near perfect gem, and I think it is Holden. He embodies the thing this film is trying to be (about unrequited want), and his achievement is what we call movie magic.