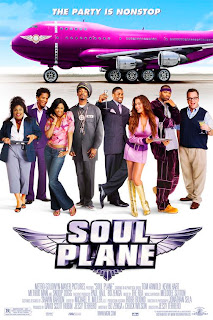 The subject of this movie review is Soul Plane, a 2004 jiggaboo comedy. Kevin Hart stars as a young man who starts his own Black-centric airline, and the story focuses on the maiden voyage of the sole plane in his non-existent fleet.

That white writers (usually from upper middle class backgrounds) wrote sketch comedy making fun of black culture used to piss me off. Why the hell couldn’t Hollywood just hire black writers, I rhetorically asked, to write about blacks since white film and TV executives felt that only whites could write about whites. Well, if the best that black writers and filmmakers can do is Soul Plane, never let a nigga touch another sheet of paper.

When Nashawn Wade (Kevin Hart) wins a $100 million settlement for negligence from an airline, he decides to start his own airline: NWA. Lest you confuse yourself, this NWA is not that N.W.A.; for the sake of this movie the acronym stands for “Nashawn Wade Airline.” In flight meals can be anything from Cristal and filet mignon to Colt .45 and Popeye’s fried chicken. The airline’s one plane is purple and rolls on dubs, and the stewardesses are big booty ho’s in Daisy Dukes. When his cousin (badly played by rapper Method Man) hires an ex-con (Snoop Dogg) to fly the plane, you know there’s going to be trouble and hilarity ensues.

Soul Plane is a poorly made collection of stereotypes, blaxtiploitation, riffs on hip hop culture, deplorable acting, and feeble musical tracks. Except for a few moments, the film is painfully unfunny. In fact, 9.5 of every ten minutes of this film is not funny, although the few good scenes are both shocking, painfully embarrassing, and outrageously hilarious – kind of like Scary Movie 3, but with way fewer yucks. Frankly, it’s more saddening than bad.

The cast is either extraordinarily untalented or just misused. Kevin Hart is a Sambo version of Chris Tucker, and his performance is like a frantic and desperate crackhead trying to be funny. Mo’Nique isn’t in the movie enough, and Tom Arnold (practically the lone salvation of this film) may have his name at the front of the credits, but this is (quite unfortunately) not his film.