"Flushed Away" Was the Best Animated Film of 2006 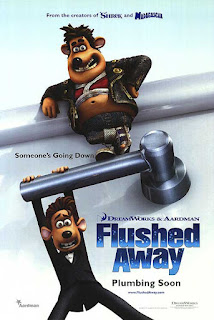 The computer-animated feature film, Flushed Away, is the star child of two of the most successful animation studios of the last decade: DreamWorks Animation (Shrek) and Aardman Features (Wallace and Gromit: The Curse of the Were-Rabbit). DreamWorks creates state-of-the-art computer animation. Aardman films are usually done with stop-motion animation, and their characters and sets are made of Plasticene (modeling clay) – called “claymation.” Now, the two studios have created a film with a story and characters that are as inventive as the technical and artistic process that created it.

The story begins in London – specifically the Kensington Gardens house where Roddy St. James (Hugh Jackman) lives the pampered life of a pet mouse. Roddy gets an unwanted guest in the form of a rowdy sewer rat named Sid (Shane Richie), after he comes spewing out of the sink. Roddy tries to get rid of Sid by tricking him into taking a whirlpool bath in the toilet, but Sid pushes Roddy in and Roddy gets flushed away.

After a rough trip, Roddy discovers a metropolis in the sewers beneath London, made by industrious rodents out of discarded items. Roddy meets the spunky and resourceful Rita (Kate Winslet), captain of her own boat, the Jammy Dodger. Rita, however, is in the middle of a long-running feud with a local crime lord, the villainous Toad (Ian McKellen, superb as a villain prone to fits of melodrama and theatrics). Toad despises all rodents and has hatched a diabolical plot to destroy all of them during halftime of the World Cup. Roddy and Rita are determined to stop him, but to do that, they have to battle Toad’s henchrats Spike (Andy Serkis) and Whitey (Bill Nighy), as well as Toad’s cousin, Le Frog (Jean Reno), every step of the way.

There are animated films in which the composition in terms of what the viewer sees on screen is prettier – Pixar productions come to mind, but when it comes to pure comedy, I would be hard pressed to find a more successful 3D animated film than Flushed Away. Visually, Flushed Away is true to the signature style of Aardman, as seen in the Wallace and Gromit films and in Chicken Run, but I would be remiss in this review if I emphasized the technical side. Flushed Away is a funny film, a superb achievement in comedy as good as live action.

The strong screenwriting emphasizes wacky, scatological humor and funny characters. The humor isn’t too crude for children; actually, it’s the kind of humor that frequently shows up in children’s entertainment: jokes and sight gags about bodily functions, taking a blow to the loins, and other light innuendo. This is a broad kind of humor, seemingly lowbrow but familiar to all regardless of age. Simply brilliant, the comedy writing is wry yet boisterous and both subtle and blunt. A blend of parody and slapstick, Flushed Away satirizes melodramatic, Hollywood action thrillers, and it still has time to be part romantic comedy.

It’s not as if any one group of people should get credit for Flushed Away being such a fine flick. However, if the voice performers weren’t so good, the excellent work of the directors, writers, animators, and computer guys would have been… flushed away. The vocal performances take this film to the next two levels by bringing the characters to life in such a way that they become more than just kiddie cartoons. Truthfully, Hugh Jackman, Kate Winslet, and Ian McKellan, and Jean Reno are international movie stars and superb actors, and their supporting cast – Andy Serkis, Bill Nighy, and Shane Richie – are fine character actors. Indeed, Serkis’ comically inept little brute, Spike, and Nighy’s Zen heavy, Whitey, are so funny and well done that the duo deserves its own flick. In the end, the actors give us the same great work they would in a live action movie, and that is the main reason why Flushed Away may be the year’s best animated feature film.