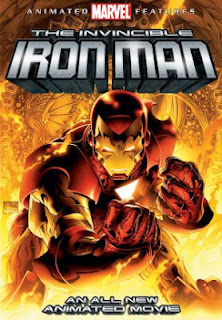 The Invincible Iron Man is a 2007 straight-to-DVD animated film starring Marvel Comics’ superhero, Iron Man. It is the third movie in the Marvel Animated Features line. This was a series of eight animated feature films produced by MLG Productions, a joint venture between Marvel Entertainment and Lionsgate. The Invincible Iron Man is a retelling of Iron Man’s origin story.

Billionaire industrialist, inventor, and playboy Tony Stark (Marc Worden) unearths an ancient Chinese ruin and digs up more than he bargained for when he awakens the Mandarin (Fred Tatasciore), an evil entity buried for centuries in the ruined palace. The Chinese government also blames Stark for providing weapons to the Jade Dragons, a terrorist group bent on keeping the ruins beneath the earth and the Mandarin from rising again. A Jade Dragon, Li Mei (Gwendoline Yeo), is sympathetic towards Tony.

Meanwhile, Tony’s father, Howard Stark (John McCook), has taken steps to remove his son from the family business. Finding himself buried in trouble, Stark turns to his employees and friends, Rhodey (Rodney Saulsberry) and Pepper Potts (Elisa Gabrielli). However, it is his high-tech suit of armor that gives Stark the power to fight the Mandarin’s minions, the monstrous Elementals. With that suit, Iron Man is born.

The Invincible Iron Man is the third direct-to-DVD film from Marvel Entertainment and film company Lionsgate featuring characters from Marvel’s extensive library of comic book characters. Iron Man isn’t as good as the two earlier Ultimate Avengers films, which featured Iron Man as an Avenger. The animation in Iron Man is average at best, although the background art is quite beautiful. The animators used computer rendering to create the three suits of armor Iron Man actually wears in the film, and also to create the Elementals that IM battles and several moving vehicles.

The acting is so-so, with only Gwendoline Yeo as Li Mei distinguishing herself. The writing is pretty bad. In fact, there are several lapses in logic that exist merely to justify or to create certain conflicts. What saves this movie is its action-packed second half, which is one long run of fight scenes that prove that animation is the best medium for adapting comic books to motion pictures.