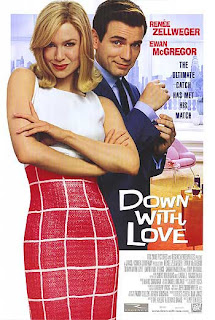 The subject of this movie review is Down with Love, a 2003 romantic comedy. Directed by Peyton Reed, it is a pastiche of early 1960s sex comedies.

The Renée Zellweger-Ewan McGregor comedy, Down with Love, was apparently an attempt to recreate the Doris Day-Rock Hudson film Pillow Talk in both appearance and mood. Down with Love also tries to capture the time period of similar comedies from the 1950’s and 1960’s, like the 1964 Natalie Wood movie, Sex and the Single Girl, from which Down with Love borrows the plot device of a heroine writing a best selling book. The film does want to be something from the past, but it is more retro than accurate. The anachronisms may be deliberate, but that makes the film a strange hybrid of being both historical fiction and a naïve nostalgic revival. It’s so peculiar that the best I can do is say that I found it mildly entertaining and pleasant with its wall to wall tongue-in-cheek humor, but I can’t say any reader of this review will like it, although the film clearly had admirers including several print, television, and online reviewers.

Barbara Novak (Ms. Zellweger) writes a best-selling book, Down with Love, that leads a lot of women to start looking at love, relationships, and sex the way men do. Barbara earns the ire of dashing playboy journalist, Catcher Block (McGregor). A womanizer who is described as a “man’s man, ladies’ man, man about town,” Block targets Barbara for a takedown. He adopts the guise of an innocent Southern gentleman and astronaut and courts Barbara in an attempt to make her do just what her book says women should not do, fall in love with a man, but will Catcher fall in love with Barbara?

Down with Love is coy and filled with sexual innuendo. The innuendo is good for some laughs, but the coyness ultimately hurts the film. In the final analysis the films seems to encourage marriage, while also suggesting that a woman assume some feminist position of power. Chase a man, then run away from the man when you realize that you’ve mistakenly fallen in love with him. Make him beg to respect you, play hard to get, then give in – I don’t know what’s going on here. However, Down with Love certainly looks like the few romantic comedies from the 1950’s and 60’s I’ve seen. The art direction resulted in some truly beautiful sets and the cinematography is both of a fine quality and convincingly looks like the time period it attempts to mimic.

Ms. Zellweger and McGregor are charming, but are more or less on automatic, relying on star power, their good looks and reputations rather than on acting chops. The actual standout performer in Down with Love is the costume designer Daniel Orlandi and his crew. Every costume (from head to toe) was custom made for each character. So I’ll recommend this film for fans of the lead performers and romantic/comedies, especially of those from the 1950’s and 60’s.