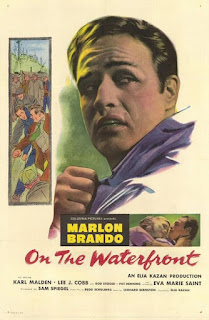 The 1954 “Best Picture” winner, On the Waterfront, remains one of the all-time greats of American cinema. A landmark “issue” film, its screenplay is based upon Malcolm Johnson’s series of articles for the New York Sun, “Crime on the Waterfront;” the Pulitzer Prize-winning series focused on organized crime’s control of the longshoreman’s union, specifically in New York City. However, On the Waterfront is more than just an important film or some kind of docu-drama, it is film art as truth, taking real life and wringing the drama out of it into a story that is compelling because it portrays true crime and also because it beautifully depicts the struggle of real lives.

Terry Malloy (Marlon Brando in an Oscar-winning role) was a prizefighter who threw fights for his corrupt boxing manager and for his brother Charley “the Gent” Malloy (Rod Steiger), who was in tight with organized crime. Now, Terry feeds his pigeons and runs errands for Johnny Friendly (Lee J. Cobb), the corrupt boss of the longshoreman’s (or dock workers’) union, but one of those errands leads to the death of an acquaintance, Joey Doyle, at the hands of Friendly’s thugs. Now, the Waterfront Crime Commission is about to hold hearings on the underworld’s infiltration of unions, specifically the longshoremen.

Terry feels pangs of guilt, especially after he meets and falls for Joey Doyle’s sister, Edie (Eva Marie Saint, who won an Oscar for supporting actress for the role). Spurred on by Edie (who sees more in Terry than he sees in himself) and Father Barry (Karl Malden), a local priest who wants to stop the corrupt union from preying on desperate workers, the washed up boxer contemplates taking on the corrupt union boss, Friendly, much to the chagrin of Friendly and Friendly’s right hand man, Terry’s brother Charley.

Marlon Brando gives one of the great screen performances as Terry Malloy, and the cab ride with Terry and Charley having a man-to-man chat in the backseat is one of the most famous scenes in cinematic history. Brando embodies a man who is soured on life and made cynical by his bad decisions, the cruel injustices, and minor (and major) disappointments in life. We can watch Brando struggle to better himself against the part of him that really believes in nothing more than getting by each day, a man who believes that you live longer if you don’t have ambitions. This performance is a work of art that established Brando in many minds as the greatest screen actor of all time.

Don’t let Brando’s performance take away from the rest of the cast. There are some really great supporting performances here. Eva Marie Saint is fetching as a young woman who can be both relentless in her quest for justice and coy in her play at getting a man. Karl Malden’s Father Barry also has a great scene at the dock when he delivers a powerful “eulogy” about standing up like Christ to injustice and accepting that Christ is in each and every man, making each man your brother – powerful stuff.

On the Waterfront is superbly directed; it’s as if Elia Kazan couldn’t help but make the right choice every time. He was blessed with Budd Schulberg’s screenplay, which mastered the perfect balance of gritty realism and potent drama. Combine excellent cinematography with the real locations in NYC, and you have must-see cinema.