"March of the Penguins" a Quality Family Film 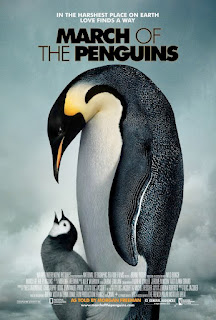 The subject of this movie review is La Marche de l’empereur, a 2005 nature documentary film from France. It was released in the United States as March of the Penguins, where it was a box office success and later won the Oscar for best documentary film.

In the Antarctic, the emperor penguins make an annual trek in order to return to their breeding grounds for mating season. Leaving their home, the ocean, in which they spend only a short time considering the time they devote to breeding, the emperor penguins must overcome daunting obstacles, and their trek calls to the mind of the viewer many of human experiences: birth and death, courtship and mating, comedy and drama, elation and heartbreak, and just fighting for survival. Morgan Freeman narrates the American version of La Marche de l’empereur, entitled March of the Penguins, one of the most popular documentaries in American box office history.

Viewers who like nature documentaries may like March of the Penguins. I don’t find it anymore compelling than the numerous episodes of “Mutual of Omaha’s Wild Kingdom” (1963-88) that I watched on TV when I was a child. The one thing that makes it stand out from what’s available on PBS, the Discovery Channel, The Learning Channel, etc., is the amazing cinematography (all those lovingly long shots of the cold, foreboding Antarctic icescape) and Alex Wurman’s haunting and captivating score done for the U.S. version (the original French film has a pop music score). Morgan Freeman’s voice makes for an irritating narration, but I didn’t like his short prologue and short epilogue for Steven Spielberg’s War of the Worlds either. Mostly, March of the Penguins is a mildly fascinating, but quality TV show masquerading as a film, so try it on home video and DVD.