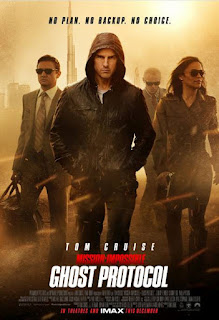 Mission: Impossible – Ghost Protocol is a 2011 action thriller and espionage film directed by Brad Bird and starring Tom Cruise. It is the fourth film in the Mission: Impossible film franchise, which is based on the U.S. television series, Mission: Impossible, created by Bruce Geller and aired on CBS from 1966 to 1973 (and revived on ABC from 1988-90).

Ghost Protocol finds the Impossible Mission Force (IMF) accused of a terrorist act and its agents forced to go rogue to clear the organization’s name. Stylish, humorous, and fast-paced, Ghost Protocol is the best Mission: Impossible movie since the 1996 original.

Super spy/secret agent and IMF team leader, Ethan Hunt (Tom Cruise) is locked in a Moscow prison. IMF sends agents from another team, Jane Carter (Paula Patton) and Benji Dunn (Simon Pegg), to extract him. Hunt is then assigned to lead Carter and Dunn on a mission to infiltrate the Moscow Kremlin archives in order to learn the identity of Cobalt, a terrorist determined to start worldwide nuclear war. When the Kremlin is bombed, however, IMF is blamed, and the Russians call the attack an undeclared act of war.

The President of the United States activates “Ghost Protocol,” which effectively disavows IMF and disbands it. The IMF Secretary (Tom Wilkinson) allows Hunt and his team to escape government custody so that they can track down Cobalt. The Secretary’s chief analyst, William Brandt (Jeremy Renner), who doesn’t seem to fit with the team, joins the mission. Without the vast resources of IMF, Ethan Hunt and his team are on their own as they try to stop Cobalt and restore IMF.

Simply put, Mission: Impossible – Ghost Protocol is a terrific thriller. The filmmakers filled it with giant, action set pieces, which grabbed my attention and turned me into a pliant zombie. Despite the fact that many of these action scenes are just plain ludicrous, they are entertaining and thrilling. I used the rewind button to watch some of them a few more times. Perhaps, this movie thrives on the magic of Brad Bird, the Oscar-winning genius behind such Pixar Animation classics as The Incredibles and Ratatouille. Ghost Protocol certainly isn’t anywhere near reality, but Bird will not only make you suspend disbelief, but also hang it high just so that you can really enjoy this flick without thinking about all the ways it doesn’t make sense.

The cast is good, and Paula Patton, Simon Pegg, and Jeremy Renner’s characters have more to do than the supporting characters in the earlier Mission: Impossible films. Still, as ever, this is a Tom Cruise movie, so the big scenes, especially the fantastical action set pieces focus on Cruise’s Ethan Hunt. Cruise’s Mission: Impossible movies are not like the TV series, which was an ensemble espionage drama. If you find Ethan Hunt as annoying as other characters Cruise has played, you may not like this or like it as much as I do.

But I can’t complain. For 15 years, Cruise has delivered the crackerjack action movie that I expected each time I sat down to watch a Mission: Impossible installment. Cruise’s high-wire act over the Burj Khalifa building in Dubai is just one of the improbable parts that make Mission: Impossible – Ghost Protocol a thrilling thriller.