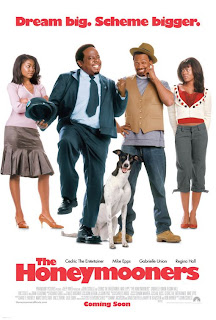 The subject of this movie review is The Honeymooners. This 2005 family comedy takes the classic television series, The Honeymooners, and transforms the characters into African-Americans, while also setting the story in the 21st Century.

Ralph Kramden (Cedric the Entertainer) is a dreamer. By day, he is a New York city bus driver. During his off-hours, he is an inventor, an entrepreneur, and an innovator who is always one get-rich-quick scheme away from instant wealth, and he has a closet full of failed products to prove it. Most of the time, Ralph’s best friend and upstairs neighbor, Ed Norton (Mike Epps), is along for the ride. Ralph’s wife, Alice (Gabrielle Union), has been putting up with it for years, but now she has had enough. Alice has her sights on a practical dream, the American dream; she and Ed’s wife, Trixie (Regina Hall), want to buy a duplex fixer-upper house that the two couples could share and build into their dream home. However, Ralph’s latest half-baked project turns out to be really half-baked, and he spent his and Alice’s savings on it. Now, he needs Ed’s help on another big money plan if he’s going to replenish their savings before Alice leaves him.

Other than the character names, a few domestic and job facts, and the title, the film The Honeymooners bares little resemblance to the CBS television series of the 1950’s that many consider classic TV and an important program in television history. The four lead characters that were white in the original are now black, which should set some tongues to wagging. All that doesn’t, in the end, matter when it comes to the issue at hand, and that’s the current film. Is The Honeymooners a good film, and how good is it?

The Honeymooners, like a lot of Hollywood film product for so many years now, is cursed with a limp script and an unimaginative director. The concept: Ralph’s latest get-rich-quick plan backfires and not only costs him money, but might cost him his marriage, was a stable of the original TV program. Apparently that concept worked great for a half-hour TV show (about 22 minutes of actual show and the rest commercials), but stretched to a 90 minute feature-length film, it doesn’t fly… or at least not long enough. The director moves The Honeymooners at a plodding pace, almost as if he were following the recipe to make bland-tasting baked goods. The script contains not a sparkle of wit or imagination, and the romance and love between husband and wife are woefully hollow notes.

The weak film structure forces the burden to entertain the audience upon the backs of the cast. Cedric the Entertainer and Mike Epps are up to the challenge; in fact, they add a lot of their own construction work to this shell of a film and make it worth seeing. A lot of the humor in Cedric’s comedic style comes from his expressive face and watching how he reacts in certain situations and to particular incidents. Epps is the perfect sidekick, a combination clown and straight man, he can do the silly stuff, or he can be the guy who balances the hijinks of the class clown. Sadly, the talented Gabrielle Union and Regina Hall (who adds meat to the comic routine she used in the Scary Movie franchise) have to fight for what little screen time they have. The limp script spends so much time anally fixated on Ralph’s next-great idea that it ignores half of what made the Ralph Kramden/Ed Norton act work – the wives.

John Leguizamo also does an edgy and hilarious turn as a jack-of-all-scams dog trainer that should remind a lot of people not only how funny this fine comedian is, but what a good actor he is. Cedric, Epps, and Leguizamo make a dynamic comic trio. Ultimately, the cast is funny enough and surprisingly charming enough on the strength of performances to make The Honeymooners worth watching, even though it’s not worth a trip to the theatre.