"The Descendants" Ascends to the Top 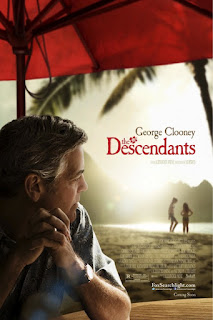 The subject of this movie review is The Descendants, a 2011 family drama from director Alexander Payne. The film is set in Hawaii and is based upon the 2007 novel of the same name by Kaui Hart Hemmings. The film, which is set in Hawaii, focuses on a man who tries to reconnect with his two daughters after his wife is seriously injured in a boating accident. By the time you read this review, dear reader, you will have heard that The Descendants is one of the best films of 2011. That’s for damn true.

Matthew “Matt” King (George Clooney) is a man with a lot on his mind. The Honolulu-based lawyer is the sole trustee of a family trust that controls 25,000 acres of untouched land on the Hawaiian island of Kaua’i. At this time, King and his relatives must decide to whom they will sell the land, which has been in the family for 150 years and which they must sell because of a rule against perpetuities.

What else is on Matt’s mind? Recently, his wife, Elizabeth Thorson King (Patricia Hastie), was in a boating accident, and now she is in a coma. As he prepares to comply with his wife’s living will, Matt must deal with his taciturn father-in-law, Scott Thorson (Robert Forster). Most difficult is reconnecting with his two daughters, to whom he is not close. Alexandra “Alex” King (Shailene Woodley), at 17-years-old, seems to specialize in self-destructive behavior. Ten-year-old Scottie (Amara Miller) shocks everyone with her brazenly inappropriate behavior. If that weren’t enough, Elizabeth had a lover, local real estate stud, Brian Speer (Matthew Lillard).

Director Alexander Payne, and his co-writers, Nat Faxon and Jim Rash, won Oscar statuettes for The Descendants’ screenplay, but this film was certainly worthy of winning more Oscars back on February 26, 2012 during the 84th Academy Awards. It’s on my shortlist of films that can arguably be said to be the top one of 2011. I am not the biggest fan of Payne’s critically acclaimed films, Sideways (2004) and About Schmidt (2002), both of which featured dark humor, as they took a satirical view of Middle American life. Although I think both movies are good, I found significant things about them to be contrived, with characters that were more annoying (which I hate) than they were unlikable (which I can accept).

The Descendants is unfailingly human, especially compared to all the contrived dramas and fantastical special effects-laden films being released. Everything this film says about marriage, family discord, and friendship just feels so authentic, but Payne doesn’t turn this film dark and morbid. He handles this potent family drama with poignancy and splashes of humor that make the heartfelt substantive rather than manipulative.

The Descendants is a testament to the amazing things filmmakers and casts can do when they come together to tell a great story about characters with whom the audience members not only identify, but also recognize in the core of their souls. In fact, Payne gets great performances from his cast, and I can see why many thought Shailene Woodley as “Alex” should have received an Oscar nomination as best supporting actress. Truthfully, everyone in this cast deserves some kind of notice; each person makes his character seem real in the context of this larger circle of family and friends.

Yes, The Descendants is one of the year’s very best movies. It is the kind of drama that is hard to forget.