Review: "All About Eve" is an Eternal Film Classic (Happy B'day, Bette Davis) 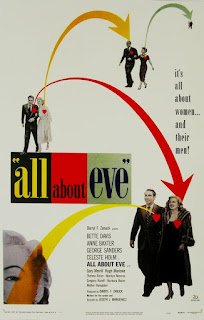 The subject of this movie review is the 1950 American drama, All About Eve. This Oscar-winning “Best Picture” was produced by Daryl F. Zanuck and was based upon Mary Orr’s 1946 short story, “The Wisdom of Eve.”

Considered the great “backstage” movie of all time, Joseph L. Mankiewicz’s All About Eve was recently released in one of those shiny DVD retrospective packages, deservedly so. Filled with an all star cast that is more than up to the challenge of turning on the thespian heat, the film is as mesmerizing, catty, and blunt as it probably was over half a century ago.

Eve Harrington (Anne Baxter), an aspiring actress, insinuates herself into a circle of theatre friends, the most famous of them being the established but aging stage actress Margo Channing (Bette Davis). Eve wants so badly to be an actress that she will manipulate, grovel, connive, lie, cheat, and do whatever it takes to make it as a star of the theatre, including hiding her real name and creating a fictitious past. Before long she is Margo’s unofficial assistant and soon fashions a close relationship with Margo’s best friend, Karen Richard (Celeste Holm), but she has her eyes of Karen’s husband Lloyd (Hugh Marlowe), a popular and critically respected playwright. Margo, in a sense, is Lloyd’s muse, and she has starred in most of Lloyd’s plays; however, Margo is fortyish and beyond the age of some of Lloyd’s youthful fictional female leads. Here is where Eve believes she can step in and capture the essence of a Lloyd character, and with the help of Addison DeWitt (George Sanders), a theatre critic (and the film’s dominant narrator), she makes it to the top of the theatrical world over the bodies of her friends.

All About Eve is a study of where ambition can get you, but it is also an examination of how cut throat a person feels she has to be to get to the top. Ms. Baxter languishes in the early part of her character as the tepid friend who just wants to serve Margo, but the actress bears her fangs and claws when Eve finally gets the proverbial foot in the door. It’s a radical and shocking transformation.

What can I add about the incomparable Bette Davis? Believe me, she shines like a nova, and she chews up her part. Margo is a force of nature and a supernatural force, throwing her weight around the story. The movie is ostensibly about Eve; she is the catalyst for the proceedings, but much of the film deals with Margo’s travails. Ms. Davis’s performance is the work of an actress dominating the screen in the chosen style of the time. Movie lovers, films buffs, and critics – none of them should ever miss this on the strength of Ms. Davis’s performance alone.

It’s a bonus to get star performances by Sanders (who won an Academy Award for his supporting role as DeWitt), drool and witty by turns and slightly menacing and all knowing most of the time. Hugh Marlowe hams it up as the playwright Lloyd Richards, but it’s the only way he can keep up with Ms. Davis.

As the film approaches the end, it really delves into the process of how stars of the stage are born, but it really lays bare the potential for ugliness in a dog eat dog world. By the end of the film, you can’t help but watch Eve’s ascendancy and realize that you have been watching what could be a story similar to Margo’s as a young, struggling actress. All About Eve is about Eve becoming Margo as the latter’s career winds to the end and the former becomes the new star of Broadway and theatre. And as another ingénue walks into the picture as the story closes, we realize that the stage is a vicious circle. Eve is about to experience what she did to Eve and her friends.

There’s only one Margo, and there’s usually only place for one at the top. In the world of performance, one has to climb over everyone else who is also trying to reach the pinnacle. After you’ve reached the top, you can sulk over the bitter feelings and ruthless process. You can wish things hadn’t been so nasty, but at least you get to sulk from the top of the heap.