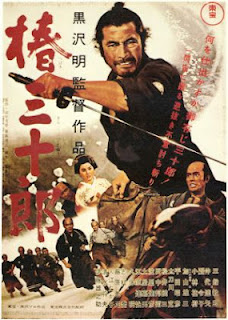 COMEDY/DRAMA with elements of action

The subject of this movie review is Sanjuro, the 1962 Japanese samurai film directed by Akira Kurosawa. This black-and-white movie is a sequel to Kurosawa’s film, Yojimbo, which starred Toshirô Mifune as a wandering ronin. Mifune returns in Sanjuro as the title character who helps a young man save his uncle who was falsely convicted by a corrupt official.

Ever adrift in an era of fading tradition and increasing lawless, Sanjûrô the ronin (masterless samurai) finds himself instructing a band of ne’er-do-wells in the art of samurai wisdom. A follow-up to Yojimbo, Akira Kurosawa’s film, Tsubaki Sanjûrô, features this movie’s title character (and the hero of Yojimbo), a crafty samurai (Toshirô Mifune), helping a naïve young man and his eight fellow clansman save the young man’s uncle who is falsely accused and imprisoned by a corrupt local official.

Not nearly as good as Yojimbo, Tsubaki Sanjûrô, for all its sword play and violence, is really about politics, especially the element of corruption that rules so much of politics. Picture Sanjûrô the swordsman as a master mediator, a centrist moving from one side to the other learning what he can, being quick on his feet, and shrewdly negotiating his way out of trouble. The nine young men will learn much from him before the master swordsman must move on…to where, they nor we know.

The film is, however, flat, and the characters, except of course for Sanjûrô, are woefully dull. The film’s best moments are the scenes in which Sanjûrô easily dissects his opponents with his verbal flare or swiftly dispatches his challengers with deadly quick sword strikes. The film really peaks in the last ten minutes when Sanjûrô faces a rival he respects and when he grudgingly accepts the admiration of his pupils before he heads off into the unknown.