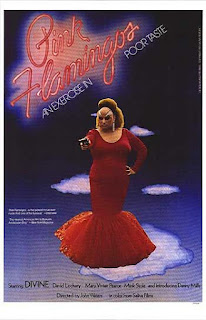 Pink Flamingos is a 1972 black comedy and exploitation film from director John Waters. Controversial upon its initial release, because of its depiction of perverse acts, Pink Flamingos went on to become a cult film because of its notoriety. The film follows a notorious female criminal and underground figure who resists attempts to both humiliate her and to steal her tabloid reputation.

Divine (Divine) lives on the outskirts of Baltimore in a trailer with her degenerate son, Crackers (Danny Mills), her dim-bulb mother, Edie (Edith Massey), and her “traveling companion,” Cotton (Mary Vivian Pearce). She lives under the pseudonym Babs Johnson, and in local outsider community and to its news press is known as the “Filthiest Person Alive.” However, local couple, Connie (Mink Stole) and Raymond Marble (David Lochary), also vies for that title. The vile Marble clan launches an unbridled assault on Babs Johnson’s reputation and on her home. But Babs and her family fight back in a small war that breaks just about every taboo in the book: incest, drug trafficking, bestiality, castration, murder, cannibalism, etc.

It seems impossible that (regardless of what other films he has directed in the past or may direct in the future) John Waters will be best remembered for any film other than Pink Flamingos. Cheaply made with a cast of amateur actors and locals from the Baltimore area (from where Waters originates), this is the kind of film that would normally merit a review of “no stars” or a grade of “F,” simply because it isn’t like a “normal” film (at least not one from Hollywood). However, Pink Flamingos may be the ultimate low budget trash movie, the ultimate camp experience, and a supreme ode to bad taste. Fun, vile, and also disgusting to the point that many people might turn off the TV early in the film (or walk out the theatre), Pink Flamingos is an object – a piece of art by someone who wants to put his thumb in the eye of American values. It doesn’t matter if its working class, middle class, church-going, God-fearing, or baseball-mom-and-apple pie American values, John Water made Pink Flamingos an assault on decency.

New Line Cinema, the film company that distributed the movie in 1972, released a trailer for Pink Flamingos that did not include scenes from the film, so in that vein, I won’t give away more about the movie. I will say that no serious fan of movies can go without seeing it.