Review: Cronenberg Plays it a Little Safe in "A Dangerous Method" 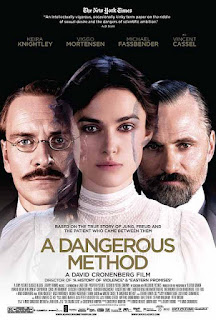 A Dangerous Method is a 2011 Canadian historical drama from director David Cronenberg. This film’s screenplay is by Christopher Hampton and is based on his play, The Talking Cure.

Another source for A Dangerous Method is the book by John Kerr, A Most Dangerous Method: The story of Jung, Freud, and Sabina Spielrein, which was also the basis for Hampton’s play. The film is a fictional account of the real-life turbulent relationships between Carl Jung, the founder of analytical psychology; Sigmund Freud, the founder of the discipline of psychoanalysis; and Sabina Spielrein, who was a patient of Jung before she later became a physician and one of the first female psychoanalysts.

Jung and Freud begin to correspond, and Freud adopts Jung as his heir apparent and also as his Aryan (or non-Jewish) ally against the European medical establishment, which is anti-Semitic. Jung finds in Sabina a kindred spirit, and soon they begin a sexual relationship. However, Jung and Freud’s relationship begins to fray, and Jung’s relationship with Sabina becomes more complicated than Jung anticipated.

A Dangerous Method’s movie poster may suggest that the film is about a love triangle. The film is really about Jung’s relationship with two people, with more of the focus on the Jung-Spielrein relationship. As Jung and Spielrein, Michael Fassbender and Keira Knightley, respectively, give strong performances by conveying the passion between the two people who must often remain restrained and repressed as a matter of societal conventions. Neither actor comes across as delivering the typical too-aloof performance that actors sometimes give when appearing in costume or historical dramas. Knightley plays Sabina as coiled and imprisoned, waiting to explode to the freedom that will allow her to be herself. Fassbender makes Jung fervent with the desire to investigate and explore that cannot be put out by the coolness of discovery. Viggo Mortensen gives the kind of tart and showy performance that can make a supporting actor a scene stealer, and he does indeed steal every scene in which he appears. Honestly, I never imagined Freud to be as Mortensen depicts him – cool and sexy.

Director David Cronenberg is known for the coolness and aloofness evident in even his most daring, unusual, and controversial films. Sometimes, there is a clinical attitude in his movies that restrains the narrative, its ideas and characters. A Dangerous Method would seem to be the perfect film in which Cronenberg would be correctly detached, even distant; however, the relationships explored in this film dare the storyteller to be objective, though I will give Cronenberg and his primary actors credit for giving this film a humorous undercurrent, especially in the first half. A Dangerous Method is a very good film, but, although it is about doctors and science, the emotions, sensations, and passions needed to be given more freedom than they are here. A Dangerous Method is a tad dangerously distant.

NOTES:
2012 Golden Globes: 1 nomination: “Best Performance by an Actor in a Supporting Role in a Motion Picture” (Viggo Mortensen)