"Stuck on You" Not a Typical Farrelly Brothers Film 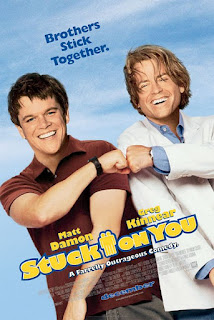 The subject of this review is Stuck on You, the 2003 comedy from brotherly filmmaking duo, Bobby and Peter Farrelly. The film follows the adventures of conjoined twin brothers who want to become professional actors.

In the Farrelly Bros.’ film, Stuck on You, Bob Tenor (Matt Damon) and his brother Walt (Greg Kinnear) are conjoined twins (also known as Siamese twins) living in Martha’s Vineyard and working at Bob restaurant, Quickie Burger. When Walt decides to pursue his acting career, Bob, of course, has to move to L.A. with Walt. The twins find fame and fortune when Cher (playing herself) picks the boys to be “co-stars” in a new TV show she’s obliged to do, hoping that the presence of the conjoined siblings will get the show cancelled. Of course, it doesn’t work, and the brothers become the program’s true stars. When Bob loses her girlfriend, however, the brothers may just have to do the thing that’s been in the back of their minds for most of their lives – have a difficult and dangerous surgery that will separate them. And even then, can they stand being apart from each other?

Farrelly films are known for the sibling directors including such shocking elements as characters with handicaps, physical deformities, retardation, and anything that makes a person really stand out in a crowd. Some of their characters are also astoundingly dumb, naïve, and stupid. Farrelly films succeed because their characters oddities make us uncomfortable, no matter how PC or charitable we may pretend to be. Within the context of the film, all the characters may act as if nothing is peculiar, but we know better, and this strangeness often leads to belly laughs.

In this Stuck on You, the Farrelly’s have toned things down considerable. Odd and odd-looking character prevail, but it all seems somewhat mundane, as if odd really isn’t odd. It’s part of the everyday fabric of the outside world. The citizens of Bob and Walt’s hometown certainly don’t act as if anything is “wrong” with the brothers; indeed, even the folks in la-la land don’t act all that freaked out by conjoined twins.

What makes Stuck on You work and that’s different from other Farrelly Bros. films is the poignancy; there is a realness to the story that goes beyond the usual craziness of Farrelly world. Damon and Kinnear are very good actors, and they sell us on the close-knit relationship between the brothers. Both are good-looking men and have charming personalities, so the audience is likely endeared to them. The closer the actors make us feel towards the characters, the more likely we’re going to laugh at the crazy things that happen to them and root for them to overcome obstacles.

Ultimately, it’s Damon and Kinnear who really sell this film as a heart-warming comedy and make it worth watching. That’s important because, Stuck on You is the antithesis of Farrelly classics like Kingpins and There’s Something About Mary. For all the laughs, the film is, indeed, quite dramatic, and while that drags at the film a few times, there are many heart-warming moments to go along with the belly laughs.