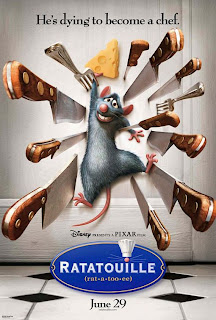 In its latest feature-length, computer-animated gem, Pixar presents Ratatouille, the story of a plucky, ambitious rat and a shy garbage boy who forge a friendship out of mutual need. Directed by Oscar-winner Brad Bird (The Incredibles), the film follows the struggle to keep the bonds of family and friendship alive under the most trying circumstances.

Born with a gifted sense of smell that helps him appreciate the ingredients that go into a great dish, Remy (Patton Oswalt) longs to be a great French chef, but he is a rat, and cooking is a highly rodent-phobic profession. Living in the French countryside, Remy’s dreams put him at odds with his father, Django (Brian Dennehy), and his brother, Emile (Peter Sohn). Fate, however, soon places Remy in the sewers beneath Paris, and he finds himself near Gusteau’s, the restaurant made famous by his culinary hero, the late chef Auguste Gusteau (Brad Garrett), whose motto was “anyone can cook.”

Remy strikes an unlikely bargain with Linguini (Lou Romano), a down-and-out garbage boy at Gusteau’s, and together they become unlikely popular chefs. Remy discovers that by pulling tuffs of Linguini’s hair he can control the young chef as if he were a puppet – Linguini’s clumsy body channels Remy’s creative brain. Their dreams, however, may come to an end thanks to the efforts of Skinner (Ian Holm), the man who now runs Gusteau’s. He has his eyes on Linguini, and he’s planning on denying the boy what is rightfully his.

Ratatouille is everything that makes Pixar animated films so great. The animation is beautifully textured and inventively designed, presenting Paris as a gaslight romance. The characters, sets, art direction, lighting, etc are all outstanding – the hallmark of Pixar. The film is full of physical comedy and acrobatic hijinx with the cast of characters dashing, leaping, chasing, and catapulting. All of it works because of the tightly choreographed comic timing.

Don’t let the witty banter and slapstick comedy fool you. Ratatouille, like the other Pixar films (such as Finding Nemo), touches on emotionally resonant themes that are relatable to the audience, young and old and regardless of socio-economic standing. The film repeatedly hits on the notion of honesty. Don’t steal, and don’t make excuses for stealing. Give credit where credit is due, and look not on others with prejudice so inflexible that you fail to see their gifts. It’s all so simply put and not preachy. Ratatouille is an uproarious comedy, but also a poignant tale about being oneself and loving family and friends, and committing to colleagues. Wrapped up in such a grandly beautiful package, it is thus far on the short list of best films the year 2007 has to offer.